CAVE TOURS BY RESERVATION ONLY - Please see our Cave Tours page for other current restrictions.
Fire restrictions are in place - propane is allowed.

The  International Dark-Sky Association, headquartered in Tucson, Arizona, defines an International Dark Sky Park (IDSP) as “a public land possessing an exceptional or distinguished quality of starry nights and a nocturnal environment that is specifically protected for its scientific, natural, educational, cultural heritage, and/or public enjoyment.” The goals of the IDSP Program are to:

Watch as Michael Weasner explains his "decades-long" passion for dark skies, Astronomy, photography and the beauty of Arizona's night sky.

Observe the wonders of the night sky through astronomers’ telescopes at dark sky parks! 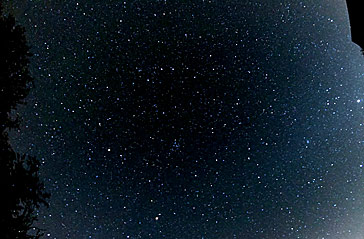 Arizona State Parks held its first Star Night Party at Alamo Lake State Park in Wenden on November 22, 2008. Since that event our astronomy and Star Night Party Program has expanded to yearly events and one-off events at 9 Arizona State Park. Out evening programs showcase Arizona's amazing dark skies! At select events, programming also includes special guest speakers from organizations like the Planetary Science Institute in Tucson and the Mount Lemmon Sky Center. Additional partners have included the Arizona Science Center and the Lowell Observatory in Flagstaff. Arizona State Parks recognizes the importance of protecting dark skies as a natural resource. Through the help of dedicated and knowledgeable park volunteers and many local Arizona astronomy groups who make this program possible, our Star Night Party Program will continue to grow.

On March 3, 2011, Alamo Lake State Park (with the Astronomers of Verde Valley, AstroVerde.org) & Kartchner Caverns State Park (with the Huachuca Astronomy Club of Southeast Arizon, (HACAstronomy.com) were the first state parks in the United States to be granted the "One Star at a Time" award and became a member of the Global Star Park Network. This award acknowledges the public stargazing events held at both parks in an effort to increase awareness of astronomy and preserving dark skies for future generations. The awards were presented by the StarLight Initiative, the One Star at a Time organization and Astronomers Without Borders. The Global Star Park Network aims to protect night environments, educate the public, and improve human habitat.