CAVE TOURS BY RESERVATION ONLY - Please see our Cave Tours page for other current restrictions.

Masks are required when visiting our ranger stations, restrooms, stores, or inside the caves. Please also wear a mask while recreating outside if social distancing cannot be maintained.

It wasn't until February 1978 that Tenen and Tufts told the property owners, James and Lois Kartchner, about their amazing discovery. During the four years of secret exploration, the discoverers realized that the cave's extraordinary variety of colors and formations must be preserved.

The cave's existence became public knowledge in 1988 when its purchase was approved as an Arizona State Park. Extraordinary precautions have been taken during its development to conserve the cave's near-pristine condition.

This bell canopy is one of many fascinating features on the Rotunda-Throne Room tour at Kartchner Caverns State Park. It is for 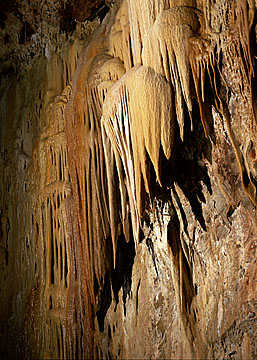 med by water flowing over a bump on the wall, then dripping to create this beautiful formation.

In November 1974 two young cavers, Gary Tenen and Randy Tufts, were exploring the limestone hills at the base of the Whetstone Mountains. In the bottom of a sinkhole they found a narrow crack leading into the hillside. Warm, moist air flowed out, signaling the existence of a cave. After several hours of crawling, they entered a pristine cavern.

The formations that decorate caves are called “speleothems.” Usually formations are composed of layers of calcite called travertine deposited by water. The form a speleothem takes is determined by whether the water drips, flows, seeps, condenses, or pools.

Kartchner Caverns is home to:

Please Remember: Many of the formations you will see have been continuously growing for tens of thousands of years. The formations grow very slowly and are extremely fragile. When visiting remember that formations damaged even by accident will stop growing. To avoid damage to the cave and injury to yourself please refrain from touching any of the formations.