Minnows and firewood in stock. Cholla ramp is open! Park store will close at noon on Thanksgiving.

Nearest fuel and propane is in Salome; campers are encouraged to bring own fuel.

Alamo Lake State Park is home to a man-made lake surrounded by low desert vegetation located in west central Arizona. The park’s distance from major population centers gives it a remote feeling of solitude, and the expansive desert views confirm that feeling. The rivers that feed Alamo Lake, the Big Sandy River and the Santa Maria River (which form the Bill 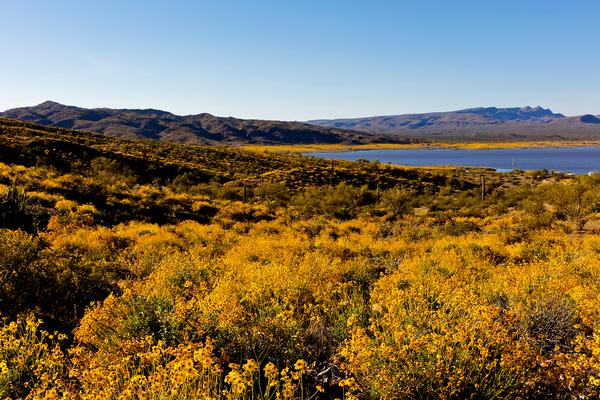 The plant community at Alamo Lake State Park is described as Sonoran Desertscrub, according to the classic manual of vegetation classification edited by David Brown. Common plants include Palo Verde (Cercidium spp.), Ironwood (Olneya tesota), Catclaw Acacia (Acacia greggii), and Mesquite (Prosopis spp.). This type of desert ecosystem is also home to some of the most diverse population distributions of cacti in the state.

Bats and other small mammals, lizards, snakes, and spiders are well adapted to the dry desert conditions in the park. Some lizards and snakes found in the area have a very limited range, such as the Regal Horned Lizard (Phrynosoma solare), Western Whiptail (Cnemidophorus tigris gracilis), and the Arizona Coral Snake (Micruroides euryxanthus). Larger mammals calling the park home include the Desert Mule Deer (Odocoileus hemionus), Mountain Lion (Puma concolor), Bobcat (Lynx rufus), Coyote (Canis latrans), and Javelina (Tayassu tajacu). This park is also home to a variety of other interesting Arizona wildlife species and offers fantastic wildlife viewing opportunities throughout the year.

Like many places in Arizona, Alamo Lake State Park is also home to non-native plants and animals. These non-native species arrive in a variety of ways; some species have been accidentally introduced and humans have introduced some purposefully. The feral burros that roam the park are a good example of non-natives thriving successfully in a challenging arid climate. They are thought to have escaped from miners in the past and have acclimated successfully to the desert.

The area encompassed by Alamo Lake State Park has a rich and varied history. It was continuously occupied from about 5000 BC when a group called the Patayan first lived in the area. Trails, sleeping circles, shrines, intaglios, and rock cairn trail markers can be found in the area. During the historic periods, the region was used by the Walapai and Yavapai. The Mohave and their ancestors may have also used the resources of the area.

By the 1600s, Spanish expeditions were in the area searching for mines and Indian villages. Pack animals of the Spaniards were burros, which, according to some historians, may be the ancestors of the burros that currently reside in the Lake Alamo area.

In the 1800s, activity in the was focused on ranching, plus gold and silver mining. In the 1900s, mining interest shifted to copper, tungsten, manganese, and uranium. These mines can still be seen in the area today.

The park is open 24 hours, year-round

The Main Ramp is open

Nearest fuel and propane in Salome

Alamo Lake State Park is one of the best places to fish for bass in Arizona. The crystal clear lake is surrounded by mountainous terrain speckled with brush, wildflowers and cacti making for a visually pleasing experience. The park has good wildlife viewing opportunities, and you may spot a bald or golden eagle. Nestled in the Bill Williams River Valley away from the hustle and bustle of everyday life, Alamo Lake State Park offers outdoor fun, premier bass fishing, rest and relaxation. For nature lovers, spring rains bring an abundance of wild flowers and the lake environment attracts a variety of wildlife year round, including waterfowl, foxes, coyotes, mule deer and wild burros. Stargazers are sure to enjoy the amazing views of the night sky, with the nearest city lights some 40 miles away.