Camper Mail Notice: Park cannot accept mail for campers, please use general delivery at the post office or make other arrangements. Packages delivered to the park will be returned to sender.

Dead Horse Ranch State Park is situated within a variety of bird and wildlife habitats which lends this area well to diverse wild inhabitants. Basically, you never know what you’re going to experience here, and that’s part of the excitement! The high desert of north-central Arizona contains unique and exciting mammals, reptiles, and birds that carve out an existence in the semi-arid climate. In contrast, the riparian areas of the Verde River host a wide variety of birds and animals that relate to and benefit from, life near the water and understory of the lush deciduous vegetation that thrives there. Take a look below and learn about the wildlife that you may encounter on your next trip to Dead Horse Ranch State Park. 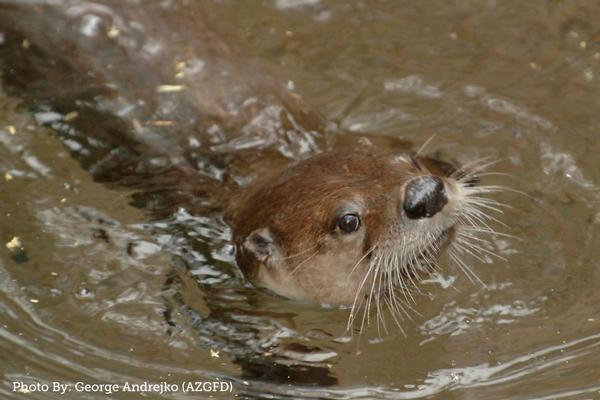 Once very common and found throughout many of Arizona’s waterways, the river otter was extirpated by early Arizona settlers for a variety of reasons. The otters you may encounter at Dead Horse Ranch State Park are descendants of those that were re-introduced into the Verde River Valley in the early 1980’s. This conservation success story was made possible by These little carnivores prey upon many of the aquatic fish, reptiles, and amphibians found in relation to the lagoons and nearby Verde River. Vocalizations include whistles and a shrill chattering type mating call. Otters mate in the spring and this is the best time to see these otherwise solitary animals interacting with other otters.

Opportunistic by nature, at times otters have even been known to steal fish right from an angler’s line or stringer! The unusual hopping gait of an otter on land is fun to watch but as the otter enters the water, it becomes very clear that their sleek bodies were made for swimming! Keep an eye out for otters throughout the lagoon and river areas, hopefully you’re lucky enough to experience their antics while in the park. If not…Well, that’s reason enough to come back again! 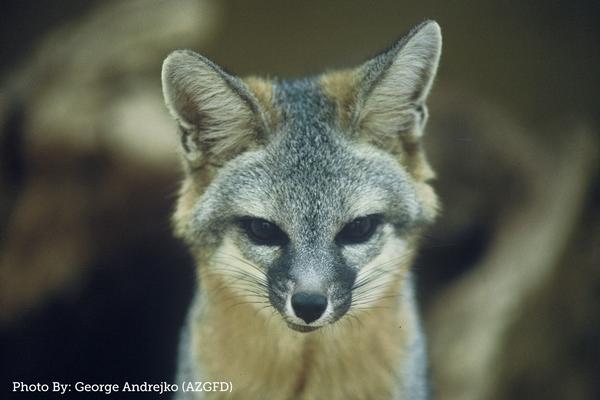 Upon first glance, a gray fox may indeed seem larger than it actually is. Their color profile and bushy tail give the appearance that they weigh more than their actual weight of 4 to 5 pounds. That being said, these little guys are decent predators of small mammals, birds, and reptiles although they supplement their diet with nuts, berries, and possibly your camp trash!! Please keep your trash well contained while at the park to dissuade the foxes and other wildlife from helping themselves to a snack.

Fun facts: The gray fox is the only member of the dog family that will readily and easily climb trees! Their hooked claws, and light weight allow them to do so with relative ease! Foxes will climb trees to avoid predation, search for food, and to sleep. Foxes have also been known to cache food for later use in times of aplenty. 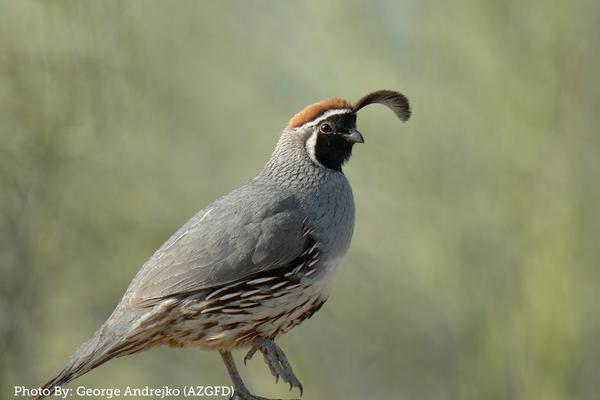 For many, the Gambel’s quail and their familiar calls signify the American west. Arizona in particular is home to several quail species, but the Gambel’s far and away is the most prevalent statewide, and the only specie found at Dead Horse Ranch State Park.

These ground dwelling birds have made some amazing adaptations in order to survive the harsh desert habitats they typically call home. Ninety percent of their diet comes from plants so most of the water needed for them to survive comes right from their food! The young quail are able to take flight at a very young age to help avoid predators like foxes, coyotes, and snakes. While hiking through the park you may “flush” a covey (group) of quail and their explosive escape will certainly startle you at first, but the memory of their acrobatics as they dodge and turn through the desert vegetation will help complete a fond memory of the experience. 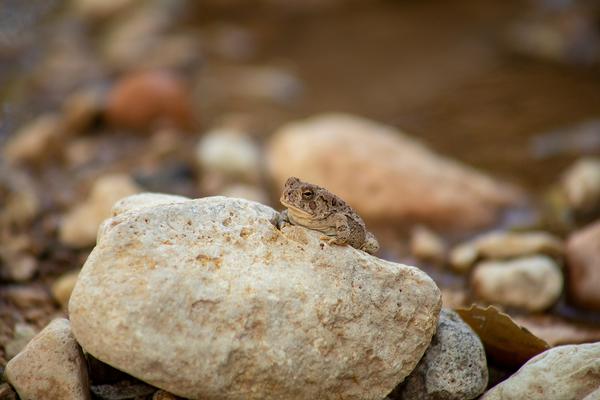 This amazingly adaptable little amphibian can be found throughout Arizona except in the highest mountains and the desert areas near Yuma, Ariz. Red-spotted toads are relatively common in north-central Arizona and can be found in several locations within Dead Horse Ranch State Park. Red-Spotted toads prefer rocky areas near permanent streams and other bodies of water. Near the Verde River and the edges of the park lagoons are great places to watch them interact and listen to their calls.

Adults grow up to three inches long and the easily identifiable high-pitched trill is a great way to locate and observe them in their natural habitat. Their preferred diet consists primarily of insects, although they sometimes feed on other small amphibians. Unlike other amphibians that lay eggs in “clumps”, red-spotted toads are born from a single egg and metamorpihize from tadpole to adult in 6-8 weeks.

The diminutive Coues whitetail deer are park regulars at Dead Horse Ranch and can commonly be seen taking advantage of the ample browse (food) and cover available at the park. This small sub-species of the eastern whitetail deer averages about 33 inches tall at the shoulder and rarely exceeds 100 pounds on the hoof which is smaller than many common dog breeds! What these deer lack in size, they more than make up for with their beautiful markings, long eyelashes, and pure athleticism.

While in the park, coues whitetails can be experienced at any time during the day, although due to their crepuscular nature are more active during the couple hours around sunrise and sunset. A pair of binoculars will aid in finding and viewing these deer during your park visit. Once spotted, please admire in amazement from a suitable distance so the deer aren’t “spooked” out of the park. This causes less stress on the animals and keeps them around for the enjoyment of everyone. Once you have an encounter with these beautiful little deer, you’ll certainly realize that they carry a huge presence despite their compact size. 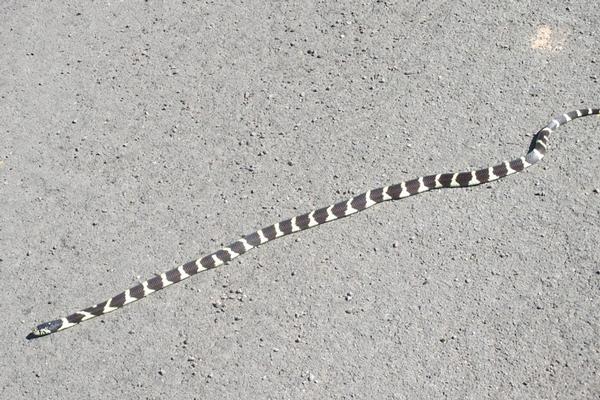 California Kingsnakes are relatively common in the park and present no risk to park visitors. In fact, because kingsnakes have a propensity for killing and eating rattlesnakes, it could be said that they keep the park safer for everyone to enjoy…More likely food items consumed by these constrictors include amphibians, birds, rodents, and other reptiles. California kingsnakes are primarily diurnal (active during the day) although during the hotter summer months, their level of nocturnal (active at night) activity increases.

These medium sized snakes attain 2.5-3.5 feet in length after reaching adulthood and interestingly enough, have the strongest squeeze proportionate to body size of any snake. This super strength really helps to overpower their reptilian prey that require less oxygen than mammals and birds do.

Looking for even more Arizona wildlife info? Sign up for our newsletter to have viewing tips, animal profiles, and wildlife themed events delivered right to your inbox!

The park is open year-round.

The story of the park's name begins with the Ireys family, who came to Arizona from Minnesota looking for a ranch to buy in the late 1940s. At one of the ranches they discovered a large dead horse lying by the road. After two days of viewing ranches, Dad Ireys asked the kids which ranch they liked the best. The kids said, “the one with the dead horse, dad!” The Ireys family chose the name Dead Horse Ranch and later, in 1973, when Arizona State Parks acquired the park, the Ireys made retaining the name a condition of sale.