Camper Mail Notice: Park cannot accept mail for campers, please use general delivery at the post office or make other arrangements. Packages delivered to the park will be returned to sender. 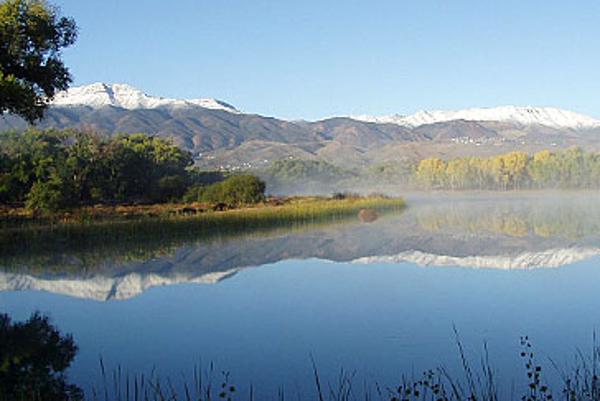 Despite its distinctive name, Dead Horse Ranch is situated amidst an abundance of life along the Verde River.

Dead Horse Ranch State Park is located in central Arizona, along the Verde River and north of the town of Cottonwood. It was the site of a working ranch in the past but is now a popular recreation park with camping, fishing, cabins, hiking, paddling, and bird watching.

Like many areas of Arizona, Dead Horse Ranch State Park is also home to non-native plants and animals. These non-native species arrive in a variety of ways; some species have been accidentally introduced and humans introduced some purposefully. Since many areas of this park were historically agricultural areas, there is an abundance of non-native species. Some of the most common include Tree of Heaven (Ailanthus altissima), Bermuda grass (Cynodon dactylon), Tumbleweed (Salsola spp.) and Russian Olive (Eleagnus angustifolia).

The Dead Horse Ranch State Park area appears to have been continuously occupied from about 8000 BC by hunters and gathers who made use of the abundant plants and wildlife along the Verde River. From approximately 800 to 1300 AD, the Hohokam widely influenced the area by introducing decorated pottery, irrigation systems for agriculture, pit houses, shell and stone ornaments, figurines, cremations, ball courts, and adobe-capped mounds. Between 1300 and 1425 AD, large field houses and forts, such as Tuzigoot, and Montezuma Castle, appear.

The Yavapai and Apache occupied the area sometime after 1425 AD. Both groups were nomadic cultures, relying to a large extent on wild desert plants, plus some horticulture and agriculture. The primary food resource for historic aboriginal groups in the area was agave.

Although the area was visited by explorers, miners, trappers, and mountain men beginning in the late 1500s, a permanent Anglo presence did not occur until the mid-1860s.

The park is open year-round.

The story of the park's name begins with the Ireys family, who came to Arizona from Minnesota looking for a ranch to buy in the late 1940s. At one of the ranches they discovered a large dead horse lying by the road. After two days of viewing ranches, Dad Ireys asked the kids which ranch they liked the best. The kids said, “the one with the dead horse, dad!” The Ireys family chose the name Dead Horse Ranch and later, in 1973, when Arizona State Parks acquired the park, the Ireys made retaining the name a condition of sale.