Chances are, if you’ve spent any amount time outside in Arizona you've had an encounter with Coues whitetail deer (Odocoileus virginianus couesi). And if not, we’re going to tell you about some great places to look for this small, beautiful subspecies of whitetail native to Arizona and the desert southwest. And who knows...You just might have an unforgettable deer encounter during your next park visit to a Coues country park!

Let’s start with a little history to help paint a picture why Coues deer are such a treasured and unique specie in Arizona. These deer were first scientifically described by naturalist and Army physician Dr. Elliot Coues while he was stationed at Ft. Whipple, AZ from 1865-1866. The Dr. pronounced his name “cows”, and this is technically the correct pronunciation of the diminutive deer species he described. However, over the years “cooz” has been adopted as the preferred pronunciation throughout their North American range, and most commonly used in conversation. In the parks you can refer to them however you please, we love to talk about these commonly seen park residents! 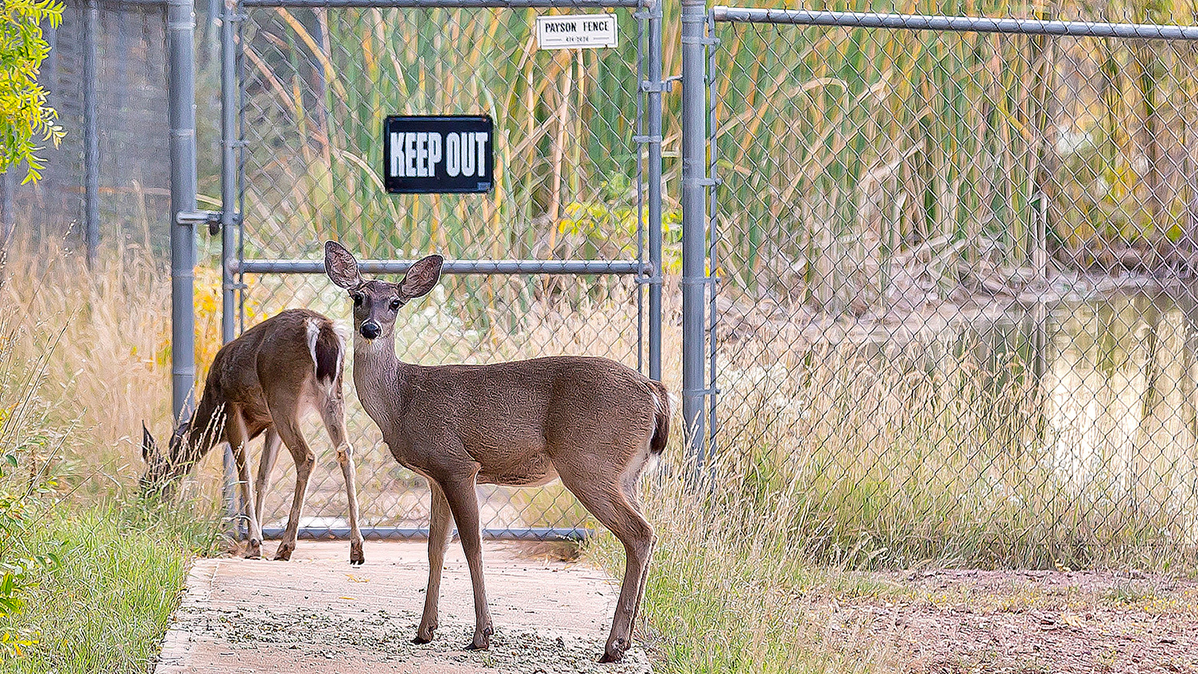 Many of our park visitors hail from locations in the midwest, back east, or northern states that know whitetails very well! In fact the Coues whitetail is very similar to the whitetails you’re used to in these other states with a few notable exceptions. The first, most eye-catching difference between Coues whitetails and their other whitetail cousins is the size. Coues deer bucks (males) are only about 30 inches tall at the shoulder, and only the biggest bodied specimens will attain weights of over 100 pounds. As is commonly seen with other types of deer, Coues deer does (females) are somewhat smaller, and adults average about 65 pounds.

The ears and tails of Coues deer may seem proportionately larger than the whitetails you’re used to back home. Their large ears are used to help dissipate heat during the hot summer months. A network of blood vessels in their ears helps cool blood temperature before returning it to their system. Pretty cool, right? Coues deer also have the familiar flag-like tails of their whitetail cousins, although larger in comparison to body size. When signaling other deer of danger, or fleeing the scene, Coues deer tails raise and flare out exposing the large white underside. White is easy to see in contrast to typical whitetail habitat, and other deer take notice very quickly before fleeing.

The slate grey, or “salt and pepper” coloration of Coues deer differs somewhat from other whitetail species as well. This helps them blend in with their habitat to aid in the evasion of their main predators, mountain lions. White or buff colored undersides, white halos around the eyes and white strips around the muzzles of Coues deer also help park visitors positively identify them. Of interesting note…Within populations of Coues deer, the top sides of their tails will vary from reddish, to grey, and even black. This is most likely due to genetics but nonetheless is fun to see deer with different colored tails within a group.

Body coloration varies throughout the year of individual deer. As the spring days get longer, Coues deer, like other deer species, shed their winter coat and begin growing a new one. As the new hair grows, the grey is replaced by a reddish, or sometimes “buckskin” colored fur. The deer will remain like this throughout the summer until the coat is then replaced once again by a new winter coat of grey that provides more warmth when temperatures start to drop. 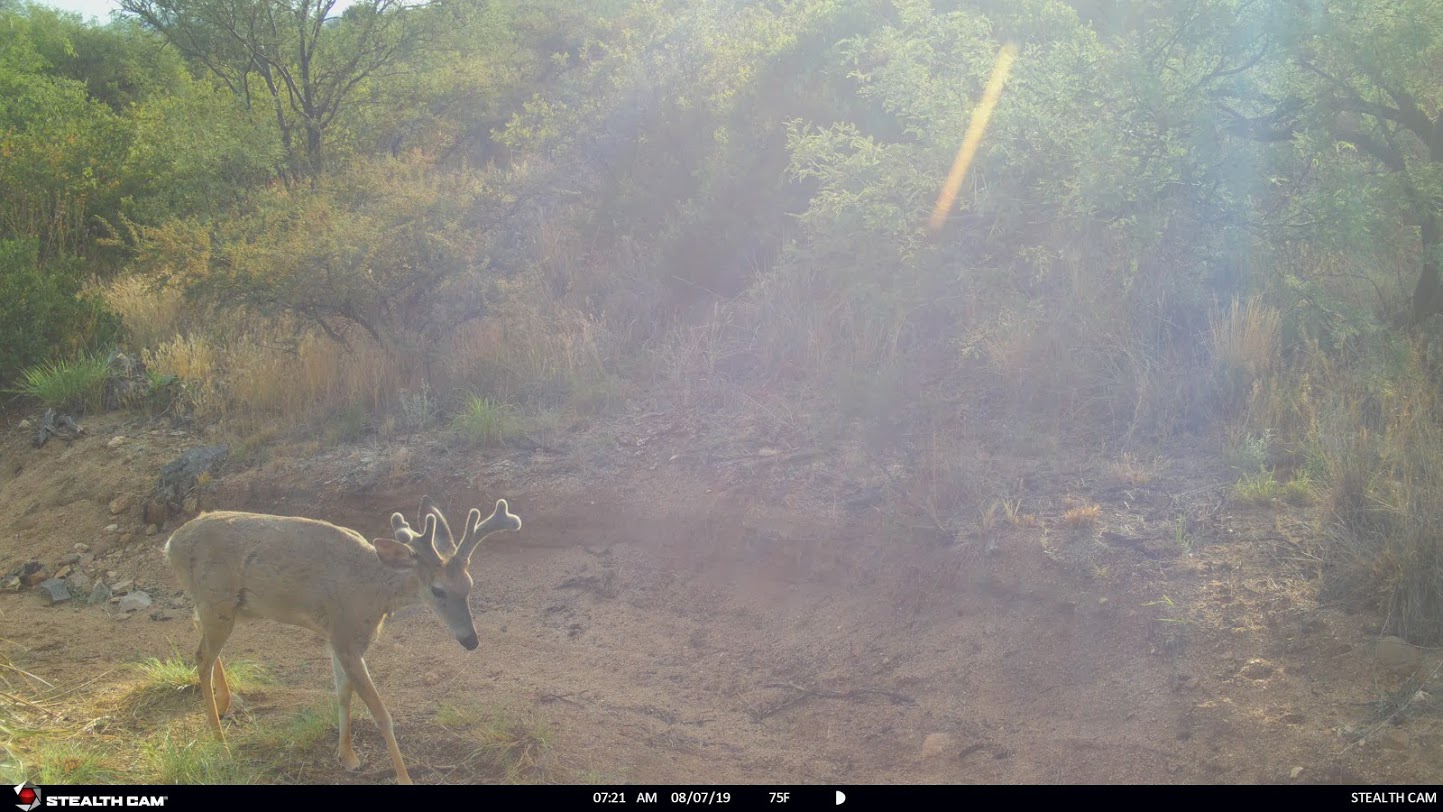 Viewing Coues deer in the parks could be as simple as a chance encounter, or as complex as setting out to find them specifically. Parks in which Coues deer are commonly seen include, Catalina, Dead Horse, Kartchner, Oracle, Patagonia (including Sonoita Creek), Slide Rock, and Tonto Natural Bridge State Parks. Each park listed above has large enough populations of Coues deer to make the possibility of an encounter very likely. Encounters usually take place on trails located in the respective parks, but keep an eye out in camp or on the roads through the parks as well. You just never know when a Coues deer will make an appearance!

Chance encounters are likely on the trails, and more often than not, the Coues deer will see you before you see them, if you see them at all. These dainty deer are most active during the times close to sunrise and sunset, but will often move throughout the day to browse or get a drink. Upon arriving to a park ask the rangers where they typically see Coues deer to increase the likelihood of an encounter.

A pair of binoculars will greatly help your chances of seeing any wildlife, but specifically Coues deer because they blend in so well with their surroundings. Keep your binoculars handy and casually scan south and east facing slopes in the morning and evening to catch the Coues deer taking advantage of food laden slopes. As the shadows grow smaller and the temperature rises, the Coues deer will seek out small isolated pockets of shade on the northern slopes, or shaded sides of vegetation or topographical features. Use your binoculars to look for the deer casually lounging in the shade but keep in mind that an entire deer may not be visible. Look instead for pieces of the deer like their big ears, "C" shaped antlers, or the white fur of their undersides to clue you in. If your binoculars are stable enough, mounted on a tripod for example, you will be able to see the subtle movements of the deer which will alert you to their presence.

Arizona’s unique wildlife is celebrated in the parks because of the opportunity to watch relatively undisturbed animals in their natural setting. In order to keep the Coues deer and other wildlife available for everyone to enjoy during their visit, please admire them from a distance. When they begin to feel the pressure of encroachment the animals may seek out areas outside of the park to live.

For more information about these amazing little deer check out this great resource.