Parking is only allowed in designated parking spots. Please observe all rules distributed by rangers when entering the park. Use caution as flooding is possible. 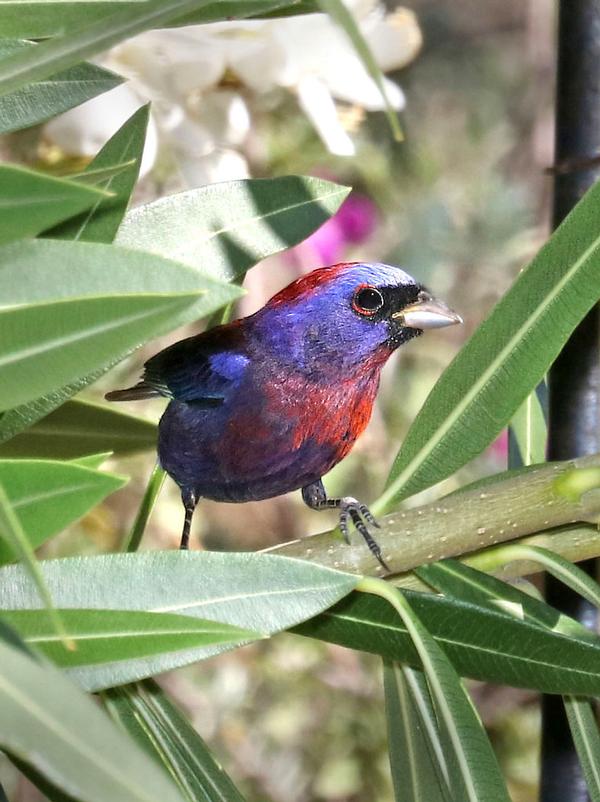 Catalina State Park has been designated an Important Birding Area (IBA) by the Audubon Society. The park has excellent desert habitat and low elevation riparian habitat, which is great for many bird species. Tucson Audubon conducted transect surveys in Catalina State Park as part of the effort to include the property in the Tucson Sky Islands IBA. This is a large IBA for Arizona at over 500 square miles. This IBA does qualify for Global IBA status and Continental IBA status. Species of special significance to this IBA that are here include: Rufous-winged sparrow, yellow-billed cuckoo, Bell's vireo and varied bunting (photo).

This is a world-wide program with over 200 countries partnering and participating. More than 12,000 sites have been identified as IBAs internationally. The global program is run by Birdlife International of the United Kingdom. For each country there is a partner organization that runs the program there; in the United States it is Audubon Society.

Looking for more great birding info? Sign up for our newsletter and get it sent right to your inbox!

Take a look at Catalina’s eBird sightings list to find out which species we’ve been seeing in the park, then see how many you can locate during your next trip!

An adult male camel spider in the genus Eremobates. Note the four pairs of legs, the two body parts, the pedipalps held up and above the body, and the formidable jaws. The pedipalps of camel spiders are covered in sensory hair-like setae and are used to feel for vibrations.

Those visitors to Catalina State Park who feel the urge to visit the bathrooms at Campgrounds A or B in the middle of the night – beware! Because at the edges of the pools of light cast by the bathroom lights lurk monstrous eight-legged beasts called camel spiders. Fortunately, these eight-legged beasties are only about 1.5 inches (3.8 cm) in length. These animals are in the class Arachnida and in the arachnid order Solifugae. They superficially resemble spiders with their eight legs and two body parts. But beyond that, they look like creatures from your Halloween nightmares. Solifuges, or camel spiders, have huge jaws and a pair of leg-like appendages called pedipalps that they hold in front of them while moving, like a pair of antennae. They are voracious, fast-moving predators that will eat any insect they can capture. And, although they are harmless to humans, they look and act like they’d be willing to go right for the jugular. Camel spiders visit the lights of Catalina to hunt insects that are also attracted to the lights. 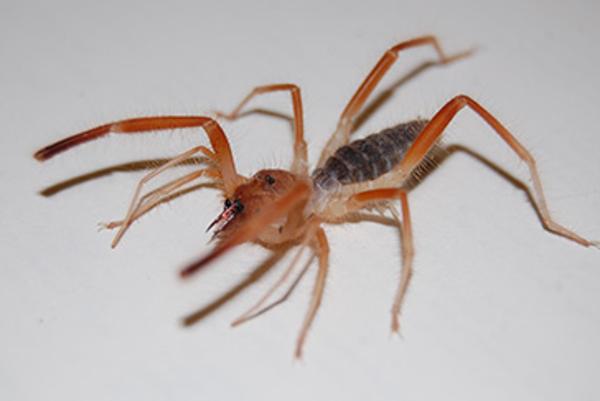 During the spring and summer of 2011 and 2012, my research assistants and I visited Catalina State Park in order to collect camel spiders for research projects examining the evolutionary relationships between different species in the North American family Eremobatidae and investigating the mating behavior of these arachnids. Our researcher group collected 11 different species of camel spiders belonging to the families Eremobatidae and Ammotrechidae. In the latter family, we collected: Ammotrechula catalinae (originally discovered by Martin Muma in the Santa Catalina Mountains of Arizona in 1967),  Ammotrechula peninsulanus, Ammotrechula pilosa, Branchia brevis, and Branchia potens. We collected the following species from the family Eremobatidae: Chanbria serpentinus, Eremobates ajoanus, Eremobates arizonicus, Eremochelis andreasana, Eremochelis bilobatus, Eremothera drachmani, Eremothera sculpturata, and Hemerotrecha bixleri. So Catalina State Park is home to 11 different species of arachnids that you may previously never have known existed!

Over 1,100 species of camel spiders are known from 12 different families found in desert environments worldwide. These arachnids date back to about 300 million years ago. They are noted for their massive and powerful jaws (called chelicerae), their voracious appetite, and their tremendous speed. A colleague named Yael Lubin once followed a running camel spider through the Negev Desert of Israel for over an hour and the animal never stopped running! They are important insect predators in harsh desert environments. Despite their importance and their species diversity, little is known about their biology and only a handful of scientists are doing research on them (my lab is the hub of solifuge research in North America). The specimens we collected at Catalina State Park helped us fill in gaps in our knowledge of these desert monsters. 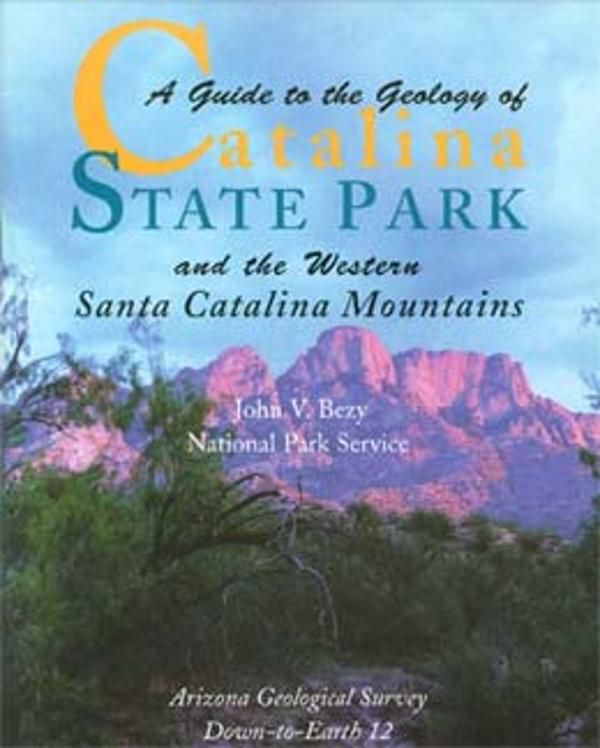 Excerpt from the Introduction:

"The northwestern margin of the Santa Catalina Mountains, located within Catalina State Park and the adjacent Coronado National Forest, contains a variety of spectacular geologic features. Because of the relatively sparse desert vegetation, all of them are easy to recognize and photograph.

Some of these features occur throughout much of the western United States. Others are unique to landscapes produced by the weathering and erosion of granite. This booklet is your field guide to the geology of this splendid desert landscape. It is a hiker’s guide; excursions on foot to the geologic features described in the text are encouraged. This book is written for the visitor who has an interest in geology, but may not have had formal training in the subject. It may also help ensure that the visiting geologist does not overlook some of the features described.

To set the stage, I have briefly described the area’s geologic setting and geologic history. In the following pages, emphasis is given to descriptions of geologic features that are common in this landscape. Precise locations are provided for those features that have more limited distribution.

The locations of the geologic features and the access roads and trails that should be used are shown on Map A. Most of the roads can be driven with any vehicle of moderate clearance. The Charouleau Gap Road is rough, rocky, and requires a 4-wheel-drive vehicle. One may prefer to hike along it. All dirt roads are slick when wet and should be driven with care. The Cañada del Oro is subject to flash flooding during periods of heavy rainfall and should be crossed with caution. Restaurants, gasoline, and emergency services are available in the towns of Catalina, Oracle, and Oro Valley, in addition to the City of Tucson. Emergency first aid is available at Catalina State Parks.

The purpose of the field guide is to provide the reader with an understanding of the dynamic processes that have shaped this exceptional landscape. Many of the features discussed in the text will be encountered again and again as you continue to explore the Southwest. We hope that your experience at Catalina State Park and the Coronado National Forest will enhance the pleasure of those explorations."

The Catalina State Park area appears to have been continuously occupied from at least the Middle Archaic period (5000-1000 BC). Prehistoric farming, small habitation, and pueblo sites constructed of rock and adobe can be found throughout the area. The Romero Ruin is an excellent example of a Hohokam pueblo with associated ball court. The earliest date for its occupation is 550-600 AD. The ruin was extensively occupied between 1000-1100 AD and then abandoned sometime between 1300-1450 AD.

Historic ranching and farming sites are also found throughout the area. The historic structures at the Romero Ruin are the remains of a ranch built by Francisco Romero in the mid- to late-1800s. Although it is reported that Romero built the wall enclosing his living structures as protection against Apache raiders, it is likely that he just improved upon the existing Hohokam compound wall. In addition, Romero probably robbed cobbles from the Hohokam structures to build his house.

A large variety of Arizona wildlife species can be found within the park. Generally, most wildlife species would rather exist unbeknownst to park visitors, although there are certainly ways to view wildlife from a point of view that causes very little disturbance to their daily lives. Wildlife species encountered within the park are in fact wild! Please use caution and good judgement while getting close for a photo or to simply watch these park inhabitants. Admire all park wildlife from a safe distance and please remember not to harass or feed the animals.

"Catalina SP offers the visitors the opportunity to see typical desert plants species in addition to many that are associated with higher elevations." The Arizona Native Plant Society offers information about Arizona's extremely rich flora (due to its diversity of altitudes and climate). The organization also offers information about the plants of Catalina SP. This list was prepared by Tom Holland and Sylvia Hosler in 2004 and was updated and edited by Joan Tedford in 2011.

The park is open year-round

Catalina State Park sits at the base of the majestic Santa Catalina Mountains. The park is a haven for desert plants and wildlife and nearly 5,000 saguaros. The 5,500 acres of foothills, canyons and streams invites camping, picnicking and bird watching — more than 150 species of birds call the park home. The park provides miles of equestrian, birding, hiking, and biking trails which wind through the park and into the Coronado National Forest at elevations near 3,000 feet. The park is located within minutes of the Tucson metropolitan area. This scenic desert park also offers equestrian trails and an equestrian center provides a staging area for trail riders with plenty of trailer parking. Bring along your curiosity and your sense of adventure as you take in the beautiful mountain backdrop, desert wildflowers, cacti and wildlife.