The park is closed until further notice.

The duplex-style Riordan Mansion remains one of the finest examples of American Arts and Crafts-style architecture open to the public today. Designed by the architect of the impressive El Tovar Hotel at the Grand Canyon, Charles Whittlesey, the homes were built in 1904 with indoor plumbing, hot and cold running water, central heat, and electric lights, reflecting the most modern technology and design of the time. View a video and learn more about Riordan Mansion.

The Riordan brothers moved to Flagstaff in the 1880’s as managers and then owners of the largest employer, the Arizona Lumber and Timber Company. At the heart of the Flagstaff community for over 50 years, their efforts advocating for progressive improvements included educational facilities such as the Normal School, which grew into today’s Northern Arizona University and the creation of Coconino County with Flagstaff as its county seat. They also recruited scientific institutions, such as Lowell Observatory, and the Fort Valley Experimental Forest Station that continue to benefit Flagstaff residents today.

Seen by guided tour only, the interiors of the Riordan family homes look essentially as they did in 1904. The homes showcase all original family belongings including fine examples of early Stickley furniture.

Timothy and Michael Riordan were prominent pioneer Flagstaff businessmen who developed a successful logging business, the Arizona Lumber and Timber Company. Moreover, the two brothers were known for their contributions which were essential to the development of the social and economic structure of Flagstaff and Northern Arizona. Tim and Mike married the Metz sisters, Caroline and Elizabeth. The women were cousins of the Babbitt brothers, another influential Flagstaff family. Tim and Caroline had two daughters; Mike and Elizabeth had six children. The two close-knit families built a large mansion comprised of two separate homes connected by a common area known as the billiard room.

Within the central Rendezvous room of the 1904 Craftsman style Riordan Mansion there are two unique sets of windows. Each window consists of seven black and white photographs with a translucent frosted glass background. The photographs depict Southwest scenic landscapes and portraits of Native Americans with a diffused lighting background.

The original windows were prepared by binding the photograph transparency in contact with a piece of finely ground glass. They were then coated with a matte varnish, thus creating a photograph on glass. The seven images provide an inspiring addition to the rustic mission decor of the room's interior. John K. Hillers, the prominent photographer who accompanied John Wesley Powell on his second expedition to the Grand Canyon in 1879, is the author of the spectacular photographs used in the windows. Hillers had met the Riordan brothers, Michael and Timothy, during archaeological excavations at Walnut Canyon in 1885. He was later commissioned by the brothers to produce the windows for the adjoining family room of their twin mansions in Flagstaff.

In 1993, an ambitious project was begun at the Riordan Mansion to address the deterioration of the glass and images. The damaged windows were faded, cracked, with pieces of glass missing. A conservation assessment in 1984 revealed that the images have been damaged by fungus growth and chemical instability through 90 years of fluctuating humidity and condensation. Due to the advance stage of fungus damage there was no hope of restoring the original glass images.

Eleven of the fourteen original negatives of John K. Hillers were discovered at the Smithsonian Institute and National Archives in Washington, D.C. The three remaining images were reproduced through computer digitizing, thus enhancing the deteriorated image. All fourteen images were reproduced on a thin sheet of inert plastic to exact sizes, encapsulated in an Ultraviolet protective laminate and sandwiched between a clear and frosted glass pane. These were placed in a replicated window frame. The original glass panes were left in the original window frames and stored in a custom built container.

The John K. Hillers window transparencies at the Riordan Mansion and those at the National Museum in Washington, D.C. are the only known surviving examples of Hillers glass photographs. The reproduced images in the Rendezvous room at Riordan Mansion State Historic Park now provide the visitor with a greatly enhanced experience of the original 1904 "Arts and Crafts" period setting.

The restored window transparency is pictured below. Come out to the park to see for yourself. 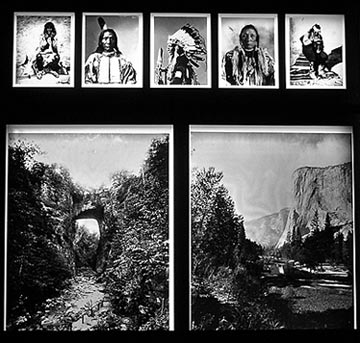