Yearly Return of the Bats

Eagerly anticipating the return of a small colony of myotis velifer, or the common cave bat, rangers here at Kartchner scan the evening sky, hoping to catch a glimpse of the first tiny bats returning to their summer home. Though nobody knows for sure where the colony spends their winter, we suspect they may hibernate in caves located high in the Huachuca mountains, only about 40 miles away from their summer home. 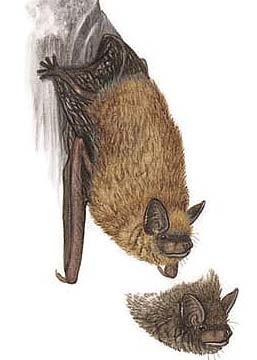 About 1,500 bats live in part of Kartchner Caverns for part of the year.

Based upon a tip supplied by a caver friend, Steve Willsey, a ranger at Kartchner, hiked up to a cave at 8,000 feet in the winter. With Willsey was Ricky Toomey, former science manager of State Parks, Ginger Nolan, former cave manager, and Ronnie Sidner, a bat researcher. What the group found, after a 130-foot rappel into the deep, cold cave, was a hibernating colony of about 2-3,000 myotis velifer. That’s a significant find.

“Ronnie told us that was the largest known myotis velifer hibernaculum found west of the Mississippi,” Willsey said. Willsey added that they only briefly observed the hibernating colony, careful to not disturb the bats’ hibernation, knowing that if they did, the bats could perish. Insecteating bats that live in temperate zones survive winters only by either flying to warmer regions where insects are still available, or by hibernation.

According to Bats of the United States by Michael J. Harvey, J. Scott Altenbach and Troy L. Best, a bat’s body temperature during hibernation is reduced from more than 100 degrees Fahrenheit to 40-60 degrees, and the heart rate decreases from more than 1,000 beats per minute to only one beat every four or five seconds, allowing hibernating bats to survive on only a few grams of stored fat during the winter months. A bat can lose up to half their weight during hibernation.

To achieve such a state of torpor, a hibernating bat must find a cave that maintains a winter temperature of about 38-40 degrees Fahrenheit. Willsey said he believes the myotis velifer colony that lives in the Big Room section of Kartchner Caverns during the summer months may be among the hibernating bats they found in the cold cave, but because there were more than 1,000 (the average size of the Kartchner colony), that bats from other colonies may be sharing that cave.

Willsey adds that one day he hopes funding will be available to track the Kartchner colony to see if indeed they are among the larger colony sharing the hibernaculum in the Huachucas.

Rangers at Kartchner have been counting the park’s bats each summer, and the last seven year’s worth of data show that the colony is maintaining its population and maybe even increasing. Cave Unit staff count the bats once a week by climbing down into the sinkhole, the only natural entrance to the cave, at twilight, with a hand-held counter. As the bats leave their home that night, the rangers count each one they see. Former cave manager Ginger Nolan said that the colony’s population fluctuates with the amount of rain the region receives each year because rainfall affects the insect population, and “When we’ve got bugs, we’ve got bats.”

The rangers at Kartchner eagerly anticipates the return of the bats to the Big Room. Rangers at other state parks may feel their first wave of spring fever with the first blooming cacti and wildflowers, but rangers here at Kartchner feel that flutter of excitement with the arrival of spring best when they see the bats returning home.

On April 15, Cave Unit staff close all the doors to the Big Room, turn out the lights, and even pull out the plugs, to be sure no lights come on in there during the summer months. They will not enter that part of the cave until late September, after the bats have migrated away. The Big Room re-opens to the public on October 15.

During the summer months, the colony of bats is busy giving birth, raising their pups, teaching them to fly, echolocate, and how to hunt. As we continue to share the beauty of the Rotunda and Throne rooms of Kartchner Caverns with the public (bats no longer roost in that area of the cave, though they once did, thousands of years ago), the Big Room belongs only to the bats during the summer. And rightly so.

The rangers at Kartchner feel good about honoring the privacy of a colony of bats, knowing these creatures are continuing their life cycles here; life cycles that have existed for thousands of years.