The park will be closed on Wednesday, November 30 due to construction projects. Highway 89 northbound and southbound may have delays of up to 20 minutes for helicopter presence in Yarnell.

A lightning strike in the Weaver Mountains at approximately 5:36 p.m. starts The Yarnell Hill Fire.

The Granite Mountain Hotshots are assigned to work the fire.

Firefighters were forced to disengage from their position in Yarnell in front of a fast moving fire at 4:22 p.m. At approximately the same time, the fire reached the eastern edge of the canyon that the Hotshots were crossing.

At 4:41 p.m., the final communication came from the Granite Mountain Hotshots indicating that they were in trouble.

At 6:35 p.m., Arizona DPS helicopter medics confirmed that all 19 Hotshots were deceased. 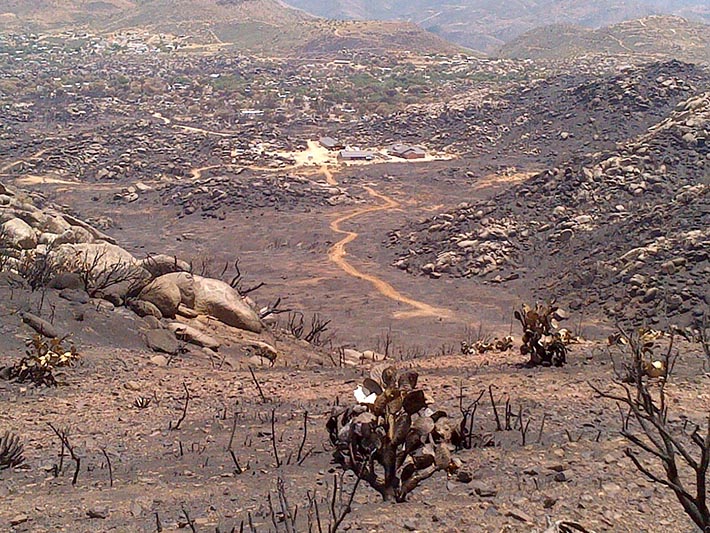 House Bill 2624 is introduced into the Arizona House of Representatives. The bill requires that the Yarnell Hill Memorial Site Board is formed to purchase the land on the site of the fire and discuss plans to develop a memorial park. The Board will include family and community members, fire professionals and officials from state and local government. Together, they will work to create plans for the creation of Arizona's first memorial state park, to serve as a lasting tribute to the memory of the 19 Granite Mountain Hotshots we lost.

The first meeting of the Yarnell Hill Memorial Site Board is held is Prescott, Arizona. Board members begin discussions to purchase the land to create a memorial park on the site.

The Board meets to discuss progress of the access and design sub-committee's work. Plans to purchase a 240-acre parcel of land to create the park are discussed. 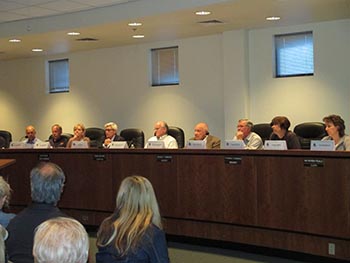 The Board meets and decides to purchase 320-acres of land to establish the park, which will provide access from nearby the White Spar Highway (89) in Yarnell. A hike and survey of the area and a proposed trail are discussed. A survey hike is planned for May.

Members of the design sub-committee meet at the site of the future trailhead to determine where a trail can be created to access the Fatality Site.

The Board meets to review the design committee site visit and discusses additional plans for the access and design sub-committees to develop final plans. 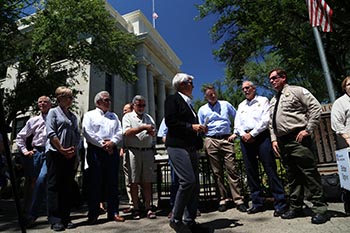 The Board meets to review the submitted design plans and discusses the various elements of the park, including the trail, interpretive signs, Observation Deck and gabion baskets that will encircle and protect the Fatality Site.

The Board meets to Discuss next steps and agrees to extend the trail from the Observation Deck down to the Fatality Site. Details of the materials that will be used to construct the gabions and how to protect the site are reviewed. Plans are submitted by the design sub-committee on the desired layout of the structures. 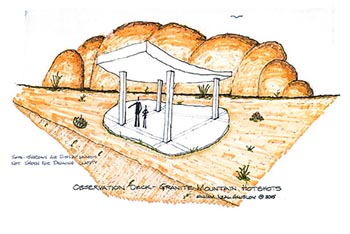 The Board met to review final plans for the Fatality Site, discussing access to the site and work completed to protect the area.

Workers from the American Conservation Experience (ACE) began work to create the 2.2 mile main trail that will lead to the Observation Deck at the summit, overlooking the Fatality Site. 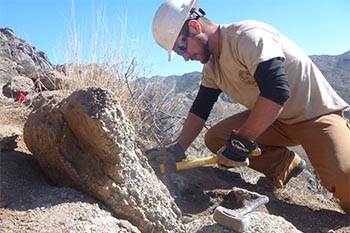 Work began on a 15-spot parking lot off Highway 89, where park visitors will start their 2.2 mile hike to the Observation Deck at the summit, overlooking the Fatality Site.

Workers from Arizona State Parks  began the work of protecting and preserving the Fatality Site. An area is cleared around the memorial markers where the 19 steel gabion baskets will be installed to encircle the site. A circular trail is also prepared to provide access to visitors around the baskets and the memorial benches. 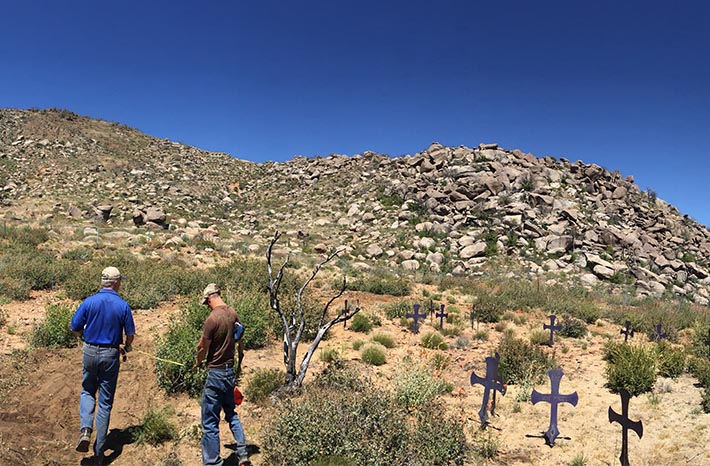 Arizona State Parks staff deliver the 19 steel gabion baskets to the Fatality Site for installation for ACI staff. The baskets were created by KGB Metal works in Tempe, Ariz. and all labor was donated. The baskets were arranged in a circle around the memorial markers to protect and preserve the area for future visitors. Each gabion basket was filled with rocks from the surrounding area.

Arizona State Parks staff complete the path surrounding the gabions and prepare it. 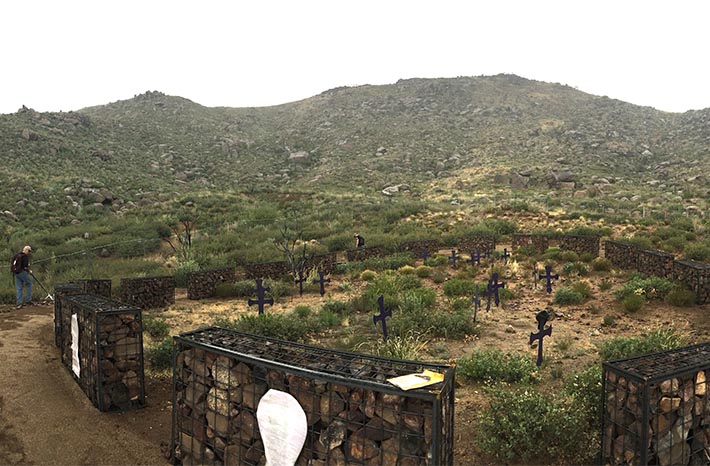 Work progresses on the parking lot and Arizona State Parks staff check on the progress of the Hotshots Trail. Locations for the 19 granite memorial plaques are also identified along the trail to be set into boulders alongside the Hotshots Trail.

Final day of work on the Hotshots Trail for the ACE trail crew. 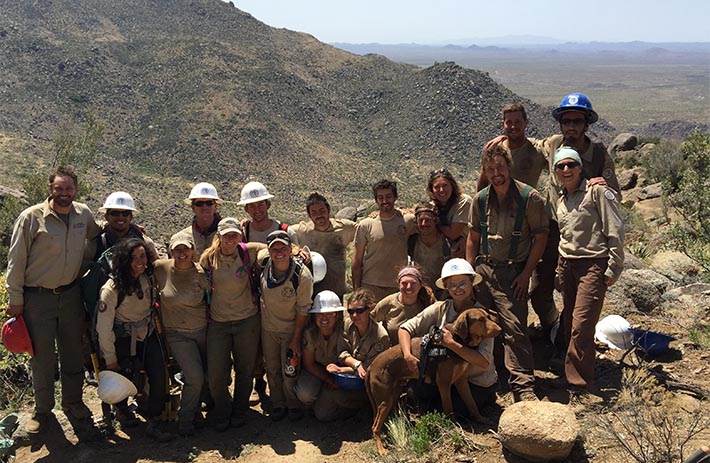 Arizona State Parks staff installs chains to connect each gabion basket, a symbol of the connection and teamwork of the Hotshots. Four memorial benches are also installed around the Fatality Site path.

The Board met to receive a $229,000 donation from Arizona Public Service Foundation to assist with completing development at the park to allow it to open to the public. Those present included Yarnell Hill Memorial Site Board & sub-committees, Arizona State Parks Foundation members, APS and APS Foundation staff and the media. 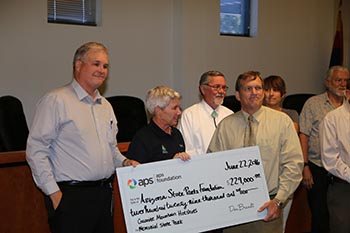 A crew from Prescott's Guidance Aviation prepares to deliver benches, signs,  the Observation Deck and supplies along the trail.

A final Board meeting was held to discuss the plans of the dedication ceremony and opening of the park to the public on November 30. 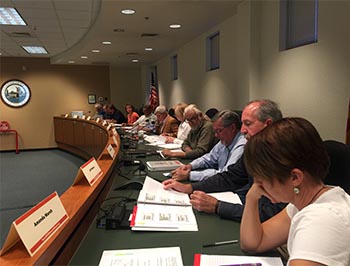 Crews install final parking lot signage, benches and the master sign at the park entrance. The dedication committee meets to review plans at the parking lot and preparation for the installation of 19 granite memorial plaques is completed. Granite material to cover the master sign was donated by Tucson's AE Recycled Granite, who created a special "Hotshots Blend" in honor of the crew. 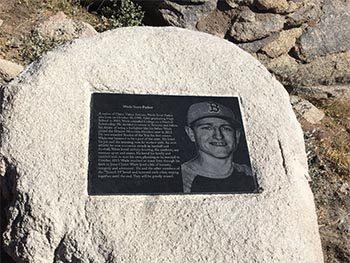 Granite memorial plaques are installed along with Interpretive signage along the Hotshots Trail.

The park's master sign is completed  that drives along the White Spar Highway (89) will see when entering the parking area. 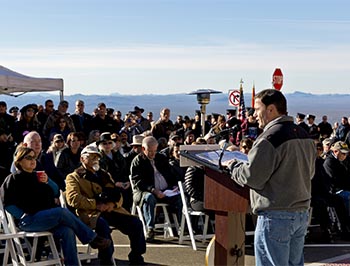 Park opened to the public. Hiking is available on the 3.5-mile Hotshot & Journey Trails from sunrise to sunset, seven days a week. 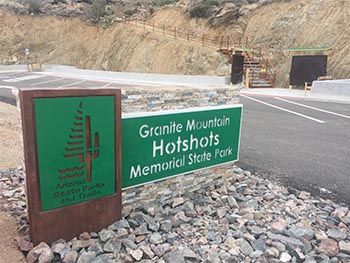 Arizona State Parks would like to sincerely thank all members of the Board, sub-committees, community and especially the families of the Hotshots for their cooperation, patience and assistance in creating a place to honor and remember the Hotshots.

Granite Mountain Hotshots Memorial State Park was dedicated in 2016 as a place to remember the 19 Granite Mountain Hotshot Firefighters who were lost on June 30, 2013, while fighting the Yarnell Hill Fire. We invite you to hike the trail to better understand the experience of these men as well as to appreciate the beauty of the town of Yarnell and the surrounding areas. Hike the Hotshots Trail from the parking lot trailhead up to the overlook where you'll see sweeping views in every direction, and perhaps leave a memento on our remembrance wall. Or continue your hike down the Memorial Trail, where you can pay your respects at the site where the Hotshots were recovered. The hike is approximately 3.5 miles long from the trailhead to the Fatality Site, for a full length of about 7 miles.