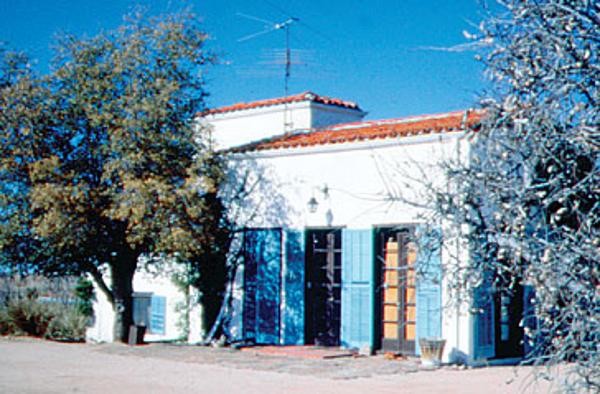 The Kannally Ranch was donated to The Defenders of Wildlife (DOW), a non-profit organization, in 1976. The will of Lucille Kannally gave the 4000-acre ranch to DOW with the stipulation that the property be perpetually used as a wildlife reserve. The DOW held this property (called the Oracle Wildlife Refuge) for ten years. For most of the time, the Oracle Education Project, under the leadership of Bob Hernbrode, utilized the Kannally Ranch House as its base of operation for a variety of environmental education programs.

In 1985, through the encouragement and efforts of Bill Roe, of the Arizona Outdoor Recreation Coordinating Commission, the DOW decided to offer the property to the State for a State Park. The Arizona Parklands Foundation (APF), a non-profit organization created by Governor Babbitt, worked with DOW and State Parks to facilitate the transfer of the property to APF for eventual transfer to the State Parks Board. In October of 1985, APF sponsored a dedication event to honor the future State Park. Governor Babbitt and the Parks Board members were in attendance. Graphic design panels, showing the name of the Park as Herberger State Park, and presenting concepts for intensive development of the property that would be a primary destination for public recreation, were exhibited at the dedication. Intended to generate enthusiasm and support for the new Park, the proposed name and developments actually generated strong opposition from the local residents.

The Parks Board held a meeting in December 1985 in Oracle to provide the people of the community an opportunity to air their concerns and to provide input and ideas for the proposed new State Park. A large number attended this meeting from the area and several volunteered to serve on a planning committee. The Parks Board accepted the offer of assistance and appointed a Planning Committee to serve as a liaison between the community and Board and to develop an acceptable park master plan.

The Arizona Parklands Foundation held the deed to the property from November 1985 until it transferred the property to the State Parks Board in March 19, 1986. The deed restrictions that came with the property prohibit hunting, trapping, off-road vehicle use, and limited development of the property to no more than 10 percent of the acreage. Mike Mayer was selected as the first Park Manager. 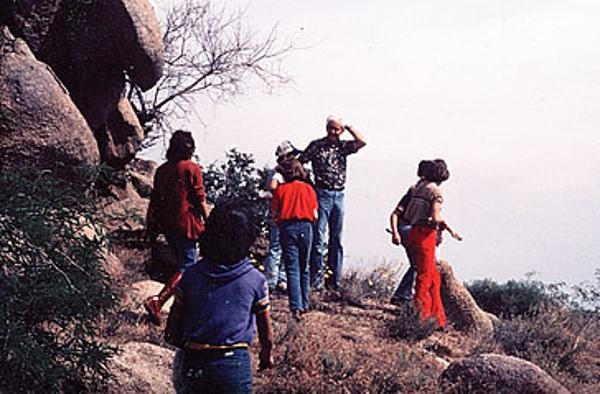 The Planning Committee worked throughout 1986 and invested a great deal of time and effort in their charge. The large group, divided into five subcommittees, sought technical input and held numerous open meetings and site visits. Many of the development ideas presented at the dedication were eliminated from further consideration during this process.

Concurrent with the activities of the Planning Committee, Arizona Department of Transportation (ADOT) contracted on January 16, 1986, for design improvements of the Mt. Lemmon Road and the Kannally Ranch House Road. The Planning Committee questioned whether the existing entrance road was the most suitable for the Park and on February 3, 1986, requested that the consultant’s scope of work be revised to analyze three alternate routes listing the advantages and disadvantages of each. The final selection would be made in conjunction with the master plan. In January 1987, the Ad Hoc Planning Committee presented its recommendations to the Arizona State Parks Board. The Board agreed with the recommendations in principle, including the recommendation that the Park have a dual purpose of serving as both a wildlife refuge and as a learning center for environmental education. In March, after reviewing the Committee’s recommendations in full, the Board formally approved the report.

In November 1987, a complete site resource inventory was initiated. This research integrated studies of the Park vegetation, wildlife species, wildlife resources, geology, soils, watersheds, hydrology, topography and several other aspects of the site and surrounding vicinity.

In early 1988, the development of a Park master plan was initiated. State Parks informed the planning consultant, McGann & Associates, Inc. of Tucson, that certain basic issues related to the development of the Park had already been established. First and foremost was that Oracle State Park would be developed and managed as both an environmental education center and wildlife preserve. Also, the Ad Hoc Planning Committee had already determined the required facilities.

A Technical Advisory Committee was organized to assist the consultant and State Parks in the master planning process. This group included members of the previous Ad Hoc Planning Committee, community representatives, resource professionals and environmental educators. During the planning process, there were numerous additional opportunities for public input through the Committee members and through open public meetings.

A question that still concerned State Parks and the Committee was where to locate the Park entrance road and new facilities. All of the alternative routes were studied and all had some disadvantages. However, the end result of the exhaustive analysis by McGann was that the ranchers who had chosen the original road into the site knew the area well. That road traversed relatively gentle terrain in an area of steep hills and canyon-like drainage ways. A road in any other portion of the Park would require extensive earthwork (moving large amounts of fill and leaving exposed cut bands). Also, the original road was in harmony with the natural drainage pattern of parallel washes crossing the property. When biologists determined that the effects on the vegetation and wildlife would be minimized utilizing the existing ranch road, this route was chosen for the Master Plan.

Throughout the master planning process, public input significantly affected plans for the Park. A walk-in entrance was added to the plan so that visitors could leave vehicles on the periphery of the site and hike in. It was decided that signage would direct visitors to the main entrance but that the public would be encouraged to use the pedestrian access as much as possible. At the request of local citizens, the name of the Park was changed to Oracle State Park - Center for Environmental Education.

The State Parks Board approved the Oracle State Park Master Plan in February 1990. The Plan outlined general description and design criteria for a new visitor center and limited picnic sites, a residential environmental education facility with bunkhouses and dining hall, a group use area, a maintenance area and staff residence area. When all facilities, roads and areas impacted by construction were combined, less than one percent of the total Park acreage was to be altered by development. The Master Plan also called for construction of wildlife watering sites to enhance the wildlife habitat. As shown on the Plan, the entrance road and most of the new facilities are sited near the edge of the oak zone, just before the elevation drops in the mesquite scrub. The majority of the oak grassland habitat in the Park would remain undisturbed.

In February of 1993, ADOT entered into a contract with another engineering consultant to complete the design for the roads and parking areas as described in the Park Master Plan. During the early part of this design process, public input raised the concern that when the walk-in entry was added (late in the master planning process), the capacity of the internal parking lots should have been re-evaluated. As a result, the total number of parking spaces within the Park was reduced from 128 in the Master Plan to 77. The only parking lot not significantly reduced was the one for the walk-in entry. A proposed one-way loop road within the Park was eliminated. Finally, a proposed divided alignment for a portion of the entrance road was deleted from the Plan as a result of comments on the Draft Environmental Assessment for the project.

In May 1993, a public meeting was held to provide the public with the opportunity to review and comment on the proposed road improvements. Seventeen individuals attended the meeting and comments were received from 10 individuals. The focus of these comments was on the master plan and the access route to the Park.

The Park was continually available for environmental education programs on a reservation basis. Oracle State Park was officially dedicated and opened to the public October 1, 2001.