Tubac Presidio State Historic Park has the distinction of being known as Arizona’s first state park; however, in realistic terms, it was the Parks Boards’ second acquisition. The inaugural Parks Board recognized that Tubac, more than any other site in the state, was worthy of state park status because of the tremendous and continuous contributions it made to the state’s development.

Tubac played an interesting and exciting role from archaeological times through the Spanish contact and colonization, Mexican occupation, and the westward and territorial expansion periods.

The story of New Spain’s presidios is unique, and Tubac is one of the few sites where it can adequately be told. Tubac Presidio State Historic Park’s primary purpose is to preserve the ruins of the oldest Spanish Presidio site in Arizona, San Ignacio de Tubac, established in 1752. The cavalrymen were stationed at the Presidio to protect the settlers from Apaches and Seris, to control the Pima Indians and to further explore the Southwest. Juan Bautista de Anza III was the second commander and the person who organized and led an expedition to California that resulted in the founding of the city of San Francisco in 1776. The expedition included 240 colonists from Sinaloa and Sonora, 63 of whom were from Tubac. The colonists gathered over 1,000 head of livestock-cattle, horses, and mules at Tubac for the expedition.

Of the presidio sites in New Spain-Tubac, Tucson, Santa Barbara, Monterey, San Diego and many in Mexico-only a small portion of these original presidios are available for interpretation. Development claimed much of the physical evidence of their earlier history. Tubac is more fortunate because the Park comprises about one-sixth of the El Presidio San Ignacio de Tubac, excluding the acequia (canal) and irrigated fields along the Rio de Tubac (Santa Cruz River) and the land where soldiers built their homes to the north and south of the Captain’s house.

Tubac’s historic significance is heightened by the rarity of presidio sites. Only two others existed in Arizona: one is now under downtown Tucson and the other, El Presidio Santa Cruz de Terranate, lies on the western banks of the San Pedro River near Fairbanks in Cochise County. 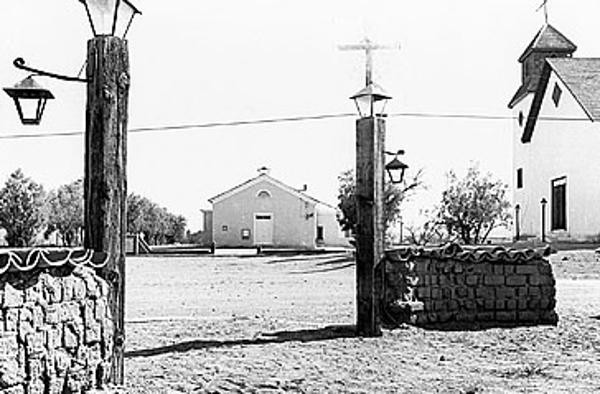 Tubac in 1856 was described by a member of the U.S. boundary survey party as “half-deserted, half in ruins”. In the next five years, Tubac became virtually deserted because of the marauding Apache Indians. It was revived in 1856 when Charles DeBrille Poston arrived from Texas with some 300 miners. Poston made the presidio headquarters for his Sonora Mining & Exploring Company.

The park also preserves and interprets one of the oldest Territorial Schoolhouses. Further, the Park exhibits the hand press used to print the first newspaper in Arizona. The Weekly Arizonan was published in Tubac on March 3, 1859.

Six governments have existed at Tubac: New Spain, Mexico, the United States of America (when the Gadsden Purchase acquired the southern part of what is now Arizona on December 30, 1853), New Mexico Territory, The Confederate States of America, and the Arizona Territory (State of Arizona).

The state park contains the ruins of the Spanish presidio founded in 1752 and the first European settlement in what later became Arizona. Credit for this site becoming a state park belongs, in large part, to interested and generous residents of the community. Frank and Olga Griffin persuaded the Santa Cruz County Board of Supervisors to recommend and support the Tubac Presidio as the number one potential state park site in the county.

The Griffins were active in preserving the local history, establishing the Tubac Restoration Foundation, and influencing the Parks Board to establish Tubac Presidio as a state park . The Griffins made the initial donation of three lots to the Parks Board on December 21, 1957. A Board Resolution approved at the February 6, 1958, meeting officially accepted this donation. The lots contained the bulk of the foundation of the Spanish Presidio. William Morrow also donated property for the Park and encouraged other residents to donate adjacent properties to the Parks Board. The donations of the Griffin and Morrow parcels comprised the core of the Tubac Presidio State Historic Park.

Tubac Presidio State Historic Park was officially dedicated on Sunday, September 28, 1958, with Senator Neilson Brown serving as the Master of Ceremonies. The featured speakers were Governor Ernest McFarland, Alvarro Obergon, Governor of Sonora, Mexico, and Zeke Taylor, Vice Chairman of the Parks Board. Paul Deno was the first Park Manager.

By 1960, six additional properties had been donated for park purposes and on February 2, 1964, the Parks Board dedicated the new visitor center/museum. Since that time, seven properties have been added to the park. Three of these properties contain significant historic structures: the Old School-1885, the Otero School-1914 and the Rojas House-1890.