Homolovi State Park will no longer accept self-pay registrations for camping. Same-day reservations can be made by coming to the visitor center in person or by calling the park office at 928-289-4106 by 4:45 p.m. Entries for non-registered campers will not be accepted after that time. Note: Arizona does not observe Daylight Saving Time. 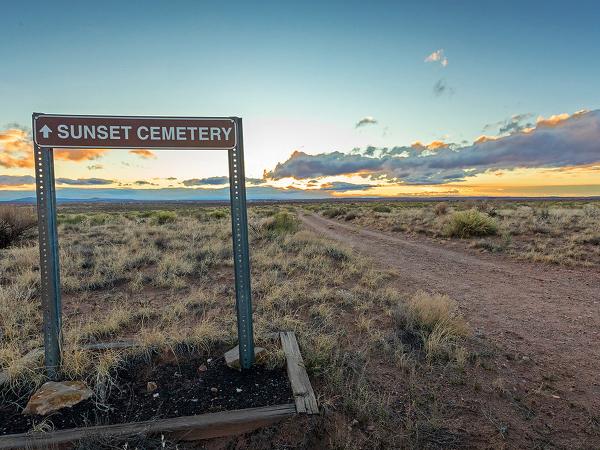 Although Homolovi State Park protects Hopi lands and cultural artifacts, the park also contains a small cemetery from a group of 19th century settlers who founded the city of Sunset. Sunset Cemetery stands as a mute testimony to the undaunted spirit of the brave pioneers who forged a living from this once desolate and forbidding land.

On January 24, 1876, over 200 men, women, and children were called as missionaries to settle the Little Colorado River Valley. James Brown and Lot Smith were appointed to lead the expedition by President Brigham Young of the Church of Jesus Christ of latter-Day Saints. The families had ten days to prepare for the journey south. It was necessary that they depart before the melting snow swelled the rivers and streams, making travel impossible.

On February 3, 1876, teams of horses, mules, and oxen pulled wagons filled with the necessities of life to establish new communities in the Arizona Territory. The journey took six weeks, covering 600 miles of new and unknown country. On Friday, the 24th day of March 1876, Lot Smith and 115 families arrived at Sunset Crossing. President Young had instructed them to settle near Sunset.

Each company organized into the United Order, a cooperative system where all things were held in common, each contributing to the common good and receiving an equal share of the surplus as needed. Their attempts to dam the Little Colorado River were unsuccessful. The river would frequently flood, washing out the dams, flooding the fields, and destroying the crops before they could be harvested and stored. Obed, St. Joseph, and Sunset relocated to higher ground and on Christmas Eve 1876, the Smith Company moved into the newly built fort of Sunset.

The first post office on the Little Colorado River was established at Sunset on July 5, 1876. The Postmaster was Mr. Alfred M. Derrick. The post office closed November 23, 1887. The local newspaper was called the Enterprise, containing short stories, poems, and news of visiting missionaries.

These early pioneers settled the territory, befriending and sharing the gospel with the Indians. After many hardships, floods, and droughts, the pioneers were relieved of their calling in 1881. Many of the pioneers were called to other missions in the San Luis Valley at Manassas, Colorado and to colonize along the Gila River Valley of the Arizona Territory. The last to leave Sunset was Lot Smith in 1888. Church President Brigham Young died on August 29, 1877. President Young called Lot Smith to the Arizona Territory and no other authority ever released him from his calling.

Today, this lonely windswept graveyard stands in memoriam to these early, resourceful and resilient pioneering families. If you have any information about the cemetery or the historic forts and would like to share this information, please contact the park.

Historical cemeteries are important to families and communities. This importance has been recognized in state legislation. They are the final resting place of our ancestors. They have religious, cultural, and research values.

Inappropriate actions, whether intentional or unintentional, may cause irreversible damage to these fragile resources. When visiting a historical cemetery, leave it as you find it. If you find vandalism or maintenance issues, contact the landowner. Cemeteries occur on both public and private land. Local mortuaries and/or cemetery associations will have information on land ownership. Help preserve Arizona's historical cemeteries by following visitor etiquette:

• Obtain permission to be on the land from the landowner.

• Report damage and/or vandalism to the landowner and/or local law enforcement.

• Take photographs and make sketches rather than rubbings.

• Weed, dig, or plant without permission of the landowner.

Homolovi State Park receives visitors every year from family members of those who are interred at Sunset Cemetery. For more information about the people who were laid to rest, visit findagrave.com, or download the park's informational guide.