*Prepare for hot weather hiking conditions: Hike in morning or evening with plenty of water.*

Guided Bird Walks and Boat Tours will resume in October. Please check back for updates.

Sonoita Creek State Natural Area is located in Santa Cruz County in southern Arizona and is a unit of Patagonia Lake State Park. It was established in 1994 to protect the natural resources present on the site. Sonoita Creek flows directly into the Santa Cruz River and serves as the only connecting riparian corridor between the high desert grasslands of the Las Cienegas National Conservation Area and the Santa Cruz River. 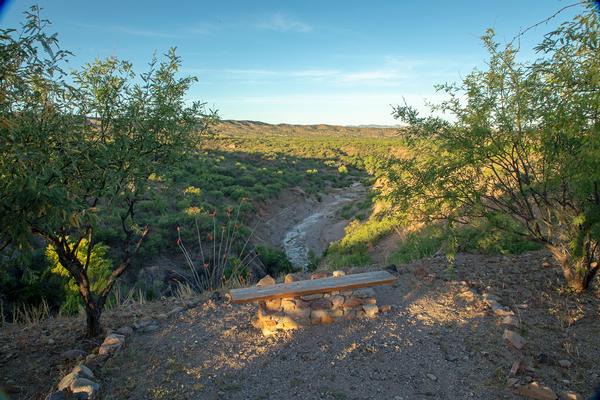 The Sonoita Creek State Natural Area (SCSNA) is a riparian and upland area of nearly 10,000-acres including the 4,300-acre Coal Mine and Ash Canyon additions purchased by Arizona Game and Fish Department, managed by the Arizona State Parks Division as part of SCSNA. It includes approximately seven miles of Sonoita Creek to the confluence with the Santa Cruz River and its associated riparian vegetation below Patagonia Lake State Park. SCSNA is bounded by 3,033-acres of State Trust Land on its eastern boundary and is leased by Arizona State Parks Board.

SCSNA has a great diversity of wildlife species stemming from the aquatic and riparian habitats, associated perennial water sources, and upland habitats. This includes 36 species of reptile and amphibians, 106 species of identified birds, 49 species of damsel and dragonflies, over 130 butterfly species, and five species of bats among the many mammal species known to occur within the SCSNA-Patagonia Lake complex. The SCSNA is also home to the federally listed Gila Topminnow and in 2007, was designated as an Important Bird Area in partnership with the Arizona Audubon Society.

Native habitats, endangered species and plant community composition and diversity are impacted by the occurrence of less desirable non-native (also known as invasive) plant and animal species in Arizona. In general, these species alter and threaten ecosystem functionality. Some of the more common problem non-native invasive species, due to their potential to invade an area and cause adverse ecological impacts, found within SCSNA include, tree of heaven, bermudagrass, Lehmann lovegrass, Russian thistle, Arabian schismus, spiny sowthistle, Johnsongrass, saltcedar, bullfrogs, crayfish mosquitofish, green sunfish, black bullhead, and largemouth bass.  Eliminating trespass cattle remains a high priority in order to increase habitat diversity and for the benefit of many native species.