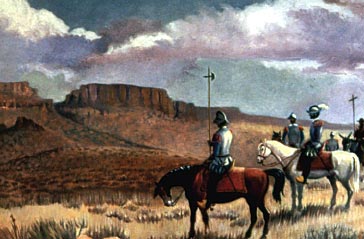 “Spanish Explorers on the Palatkwapi Trail” by Joe Rodríguez

Spanish explorers were the first Europeans known to have been in present-day Arizona. The first and most famous of these was Don Francisco Vázquez de Coronado, who in 1540 ventured through northern Mexico into Arizona searching for the fabulous legendary “Seven Cities of Gold” or “Cíbola.” Guided by friendly Indians on one of their ancient trails, it is believed that Coronado’s party crossed the Gila River, Ash Creek, the Black River, and the White River, eventually reaching what turned out, disappointingly, to be only Zuni Pueblo, near today’s New Mexico-Arizona border. They found no gold. Two of Coronado’s men, Tovar and Cárdenas, on separate journeys in northeastern Arizona, traveled another well-used trail from Zuni to the Hopi Villages. Cárdenas was the first non-Indian to see the magnificent Grand Canyon.

In 1583, Spanish explorers in central New Mexico heard about rich mineral deposits far to the west. They reached Zuni Pueblo, then continued on the old trail to Hopi. The friendly Hopis knew about the rich mines and guided the party to the Verde Valley on a path that had been used for centuries. Today, scholars refer to that route between the Hopis and the Verde Valley as the “Palatkwapi Trail.” In the next 25 years, at least two other Spanish expeditions went from Zuni to Jerome that way. At Jerome, the Spaniards found no gold or silver, only copper.

Starting in 1633, a 175 year-long succession of priests and other Spaniards continued to travel to Hopi via Zuni along this ancient corridor, trying to dominate the Hopis and convert them to Catholicism. But they enjoyed very little success. In 1776 on their famous exploration into Colorado and Utah, Fr. Silvestre Escalante and Fr. Francisco Dominguez returned to Santa Fe by way of the Zuni-Hopi Trail.