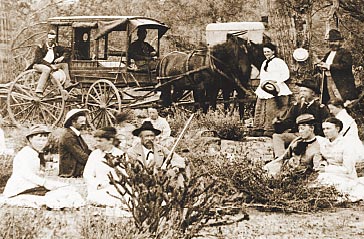 “Picnicking with the Military Escort” photo courtesy of Judy McLeod.

With the establishment of the Territorial Capital at Prescott, stage transportation from San Bernardino, California, first over the La Paz Road and soon thereafter over the Hardyville Toll Road, became a high priority. When the Vulture Mine was opened just south of Wickenburg, that town, also, became a transportation hub for the Territory. The Arizona and California Stage Company, headquartered in Wickenburg, provided passenger, mail, and light freight service to the capital from points west.

Phoenix was founded in 1867 in response to supply needs for the population of central Arizona. The Vulture Mine, Camp McDowell (a military post at the confluence of the Verde and Salt Rivers), and the towns and mines of Wickenburg and Prescott provided ready markets for crops produced in the Phoenix area. Originally, Maricopa Wells, also known as Maricopaville, was the destination of southbound stages. There the coaches made connection with John Capron’s stage line from Los Angeles to Tucson, and later with the Southern Pacific Railroad that entered Arizona in 1877. As Phoenix developed, attention turned to the Valley as the major stage destination from Prescott.

Just as today, road realignment to provide shorter, faster travel between points in the Territory was a high priority. The route from Prescott to Phoenix through Wickenburg was improved often by implementing cutoffs. Eventually, the Black Canyon provided a better route, suitable for stage and for horseback travel. Freighters still preferred the flatter route through Wickenburg.

Indian raids on the stage routes were rare, but highwaymen, known as “Knights of the Road,” caused havoc. Stage holdups occurred at the rate of nearly one per month for at least a decade starting in 1879.