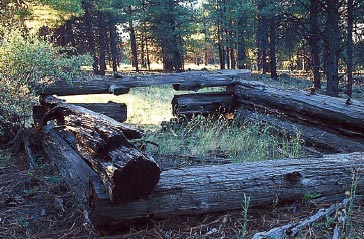 In 1863, prospectors found gold in the headwaters of the Hassayampa River, about five miles south of where Prescott lies today. Military officials in New Mexico wanted to find the shortest route to these mines. They also wanted to establish the first Arizona territorial capital near the mines.

At the time it was most used, this road extended approximately 85 miles from Flagstaff (called “Antelope Spring” before 1876) to Prescott (Fort Whipple) and served as the major way of travel between these two communities from 1863 to 1882.

The United States Army used the road extensively during those years, primarily to transport men and supplies from as far away as Fort Wingate and Santa Fe, New Mexico. Settlers in the region, and for a brief time, private stage coach enterprises, also, made use of it.

There is cause to believe that prior to the road’s Anglo use, the area’s indigenous people used the trail. This path served as an important trail route for the Hopi Indians. Certain segments of the Overland Road today make up part of the region’s primary and secondary road system.