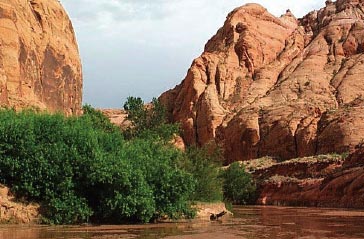 “Navajo Canyon en route to Crossing of the Fathers” photo by Paul Ostapuk.

The Old Spanish Trail, “the longest, crookedest, most arduous pack mule trail in the history of America,” (1829-1848) was best-known during the Mexican period of southwestern history. The trail started in Santa Fe and terminated in Los Angeles, and had several variants – the Armijo Route, the Main Branch, and the mountainous North Branch with East and West Forks.

For almost 200 years, a primary concern for Spanish authorities was finding a supply link between the provincial capitals of northern New Spain and the Pacific Ocean. El Camino Real (the Royal Road) existed — Santa Fe to Chihuahua, and on to Mexico City, but the round trip took many months. Early in the 19th century when independence from Spain was achieved, Mexico began to allow in trade goods from the United States over what came to be called the Santa Fe Trail, which opened in 1821 from Missouri to New Mexico. But the need continued for a connection with California and the Pacific Ocean.

Rivers, streams and mountain passes were already known to fur trappers and traders whose guiding services were employed in the 1830s and 1840s, as Mexican territory became fair game to Americans pushing west. Antonio Armijo, an enterprising merchant, had succeeded in 1829 in taking his pack train almost due west from Santa Fe to Los Angeles, a direct though difficult route that rewarded him with unbelievable profits. Entrepreneurs who followed him over the next 20 years preferred the longer, but easier and more familiar, trails that twisted north from Santa Fe through western Colorado and southern Utah, across the extreme northwest corner of Arizona, into Nevada and on to southern California. This “Spanish Trail,” became a profitable commercial route and was the means for thousands of New Mexico sheep being driven to unlimited markets during the California Gold Rush. Mormons who were settling in Utah journeyed both east and west between Salt Lake City and California; a number of southern California’s early families migrated over the route.

In 2002, the Old Spanish Trail was recognized as the nation’s 15th National Historic Trail, worthy of study, preservation, and protection.