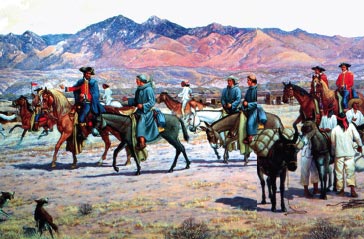 In 1775, the Viceroy of New Spain authorized Juan Bautista de Anza, commander of the Tubac Presidio, to lead a group of settlers to establish a presidio and mission in the San Francisco Bay area. Anza enlisted volunteers in Culiacán, Mexico, and the recruits gathered at the Presidio of San Miguel de Horcasitas, Sonora’s provincial capital. Anza chose José Joaquín Moraga as his lieutenant. Father Pedro Font, a Franciscan missionary, was picked as expedition chaplain. Fathers Garcés and Exiarch, also, were to accompany the group as far as the crossing of the Colorado River at Yuma.

The final staging area was Tubac. Just three weeks prior to the expedition’s arrival there, Apaches had driven off the entire herd of 500 horses, forcing the group to continue with no fresh mounts. Food supplies included six tons of flour, beans, cornmeal, sugar, and chocolate, loaded on and off of pack mules every day. Materials from cooking kettles to iron for making horseshoes added more tonnage.

Some 240 people set out from Tubac on October 23, 1775. The first night out, María Manuela Piñuelas died from complications after childbirth, the only death en route. Her son lived. Two other babies born on the trip brought the total number of settlers to 198. Of these, one-third were children 12 years old and under.

The expedition continued north along the Santa Cruz River to the Pima Villages on the Gila River, then followed the Gila to its junction with the Colorado. They were assisted in crossing the Colorado by Salvador Palma, chief of the Quechans (Yumas), whose tribe had befriended Anza on his 1774 exploratory trek. Nearly five months after leaving Tubac, the colonizing expedition arrived at the presidio of Monte Rey. They had survived a most difficult trip, endured “lack of water and food, life-threatening weather conditions, debilitated and dying animals, and roads almost impassable due to rain, mud, sand, or snow.” After selecting the sites for a presidio and mission, Anza left the colonists in Monterey to begin a long ride to Mexico City where he would deliver news of his successful venture to the Viceroy. Lt. Moraga, Anza’s second-in-command, led the settlers on to their final destination, and in June 1776, they occupied the site of what became the city of San Francisco. The epic journey is memorialized today as the Juan Bautista de Anza National Historic Trail, established in 1990.

Note: The Anza expedition also is relevant to or passed by/through the following parks:

Web de Anza A multicultural, bilingual, interactive website, operated by University of Oregon at Eugene, Oregon. Eight expedition diaries, each in both Spanish and English, are enriched with links to other primary sources.