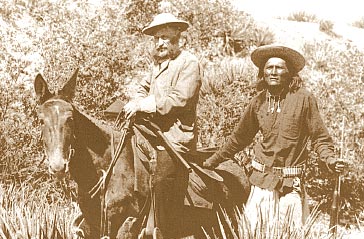 In 1871, General George Crook came to Arizona Territory as Commander of the Department of Arizona. His orders were to subdue the Indians of the Territory and place them on reservations. General Crook realized at once that in order to accomplish this goal he must be able to move troops and supplies into the haunts of the Indians with swiftness and surprise.

In August of that year, General Crook left Fort Apache with a unit of cavalry troops to locate and mark a supply road from Fort Apache to Fort Whipple in Prescott. As they moved westerly across the Mogollon Rim, then called Black Mesa, Crook realized quickly that he must stay close to the edge of the escarpment, otherwise, when he moved north, he encountered deep and rugged canyons. It was rough going but the trekkers found water in small lakes. Crook pushed on, and in early September of 1871, he reached Fort Whipple in Prescott. Actual construction of a road started in the spring of 1872. By 1873, supplies began moving by pack train from Fort Verde to Fort Apache. One year later in September 1874, the first wagon supply train left Fort Whipple for Fort Apache. Martha Summerhayes, the first woman to travel over the road, was on that trip. She later wrote the book, Vanished Arizona, telling of her experiences on the road and describing her travels in Arizona Territory.

During the next 22 years, Crook Road was used by troops patrolling across the Territory and the northern boundary of the Apache Reservation. The road was in continual use for 32 more years, until the Rim Road was built in 1928.