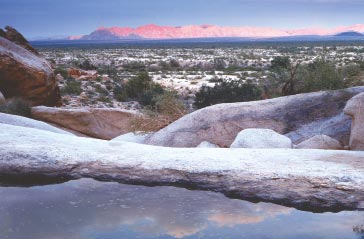 From Caborca and Sonoyta in Mexico, the trail crossed into present Arizona west of Quitobaquito Springs, then approximately paralleled the present U.S.-Mexico boundary to Tinajas Altas. Turning northward, it went to the Gila River, then westward into California. There were few dependable sources of water, and travelers had to rely on rainwater in tinajas, natural depressions found in some volcanic rocks. When these were empty or inaccessible, the journeyers perished.

With Native guides and carrying out orders from Coronado, Captain Melchior Díaz led a military detachment through the area in 1540. In 1698, Jesuit Padre Eusebio Kino traversed the region, exploring on foot and horseback, and at the same time, converting Natives to Catholicism. Kino made maps of his travel, noting major water sources. Other Spanish clergy and military expeditions traversed El Camino to reach California missions. Padre Garcés followed it in 1771, and again during 1779-81. Juan Bautista de Anza used it between 1774 and 1776, as did Pedro Fages in 1781-82.

Following gold discovery in 1849, Sonoran gold seekers from Mexico used the corridor on their way to California. A few years later, the United States negotiated the Gadsden Purchase with Mexico, and most of El Camino became American territory. After the Southern Pacific Railroad reached Yuma in 1877, the route fell into disuse. Today, with proper caution, permits, and four-wheel drive vehicles, adventuresome travelers can retrace parts of El Camino del Diablo.