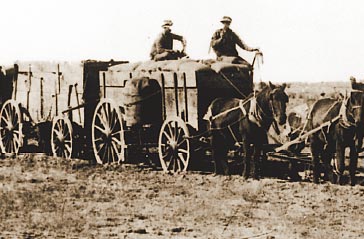 In 1863, 15 years after the war with Mexico ended, the Territory of Arizona was created. In response to the threat of Confederacy occupation, President Lincoln divided the Territory of New Mexico with the western half becoming the Territory of Arizona. A year later, the town of Prescott was created, the site chosen for its proximity to a new military post, Fort Whipple, and the rich mining claims recently discovered in the area. Prescott became the capital of the new Territory. The only other option, Tucson, was considered sympathetic to the Southern cause.

The main supply route to Prescott and Fort Whipple, serving both military and civilians, was over two freighting roads from the Colorado River. Each road was about 150 miles long, over rough, unsettled Indian country. These toll roads were laboriously constructed from the river ports of La Paz and Ehrenberg to the south, and Fort Mohave and Hardyville (now Bullhead City) to the north. The ports were supplied by shipping from San Francisco and Los Angeles around the tip of Baja Peninsula, up the Gulf of California, to the mouth of the Colorado River, and then upstream by paddle steamers. In addition to carrying freight, these roads were used by travelers, initially on their own steeds, and later, in commercial stage coaches.

The freight-wagons were often linked together like a train, with up to four wagons in tandem. Mules, four to 12 pairs per team, usually pulled them, though, occasionally, slower oxen were used instead. An iron “tire” strengthened the huge wood-spoked wheels of the heavy wagons. Even today, a keen eye can find traces of their passage in some of the remoter regions of Arizona — ruts and swales, and even the occasional rock with rust marks from iron, ground from the metal tires of the many loaded wagons that passed along the route.