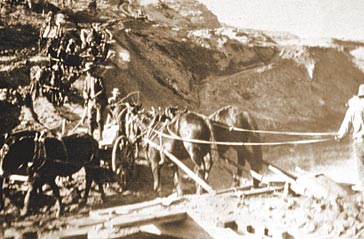 During the last 35 years of the 19th century, an important and well-used east-west trail crossed the southern part of central Arizona’s Verde Valley, linking Winslow, on the Colorado Plateau, with Prescott, in the Central Arizona Highlands, where Fort Whipple was also located. Established in 1864 by Colonel J. Francisco Chaves, the Chávez Trail, despite the general rough and rugged terrain through which it passed, enjoyed a relatively even and straight 125 miles from Winslow westward to Prescott.

At the time the trail was initially established, Winslow was known as “Sunset Crossing.” Leaving Sunset Crossing, the trail followed an old Hopi Indian path, the “Palatkwapi Trail,” going westward through Chávez Pass, past Stoneman Lake, and down the Mogollon Rim to the Verde Valley. From here it continued by way of Montezuma Well to Camp Verde. It then ascended the Black Hills up and through Copper Canyon to Ash Creek, and went on to the Agua Fria River and Prescott.

While it primarily served the needs of settlers in the immediate region, the trail also provided an important section of a much longer road that extended from Santa Fe, New Mexico to Los Angeles.