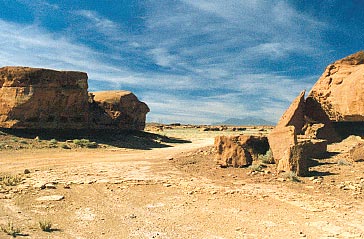 As the American population of the new state of California grew, settlers began to call for better roads to connect them with the rest of the nation. In 1856, Congress appropriated the necessary funds to construct three wagon roads. One of these was to be built along the 35th parallel (explored in 1853- 54 by Captain Amiel W. Whipple), from Fort Defiance to the Colorado River where it would connect with the Mojave Road in California. The man selected to build this road was Edward Fitzgerald Beale, who was nationally renowned for his record-breaking trips to and from California, and other exploits during the Mexican War. In addition to the usual livestock and equipment, Beale used camels recently imported from Syria to test their usefulness in the deserts of western America. The camels passed with flying colors.

Construction on Beale’s route began in August of 1857 and reached the Colorado River in October of the same year. Beale made another trip in 1859 to improve the road, this time from Ft. Smith, Arkansas, to the Colorado River. The Beale Road became popular with the military and with Arizona and California settlers, from 1858 until the coming of the AT&SF Railroad in 1882. Historic Route 66 and our modern Interstate 40 were built in the same general corridor as the old wagon road, but the original road can still be traced across most of the state and some of it is used for local travel today.