Hummingbird encounters are often quick, colorful, full of energy (and excitement), and before you know it…they’re gone in a flash! Arizona’s diverse hummingbird population consists of at least 17 species, although many are brief migrants or only incidentally seen here. We’ve put together a lineup of the Arizona hummingbird species you’re likely to encounter in one or several of your state parks. Learn about these petite bundles of energy, what makes them tick, and how to identify hummingbird species on the fly!

Anna’s are one of Arizona’s native hummingbirds, and one of the most common species encountered in the state. Anna’s hummingbirds can be seen throughout central and southern Arizona, frequenting backyard feeders throughout the Sonoran Desert. Anna’s are more common in the spring, but can be observed year-round in most of their Arizona range. 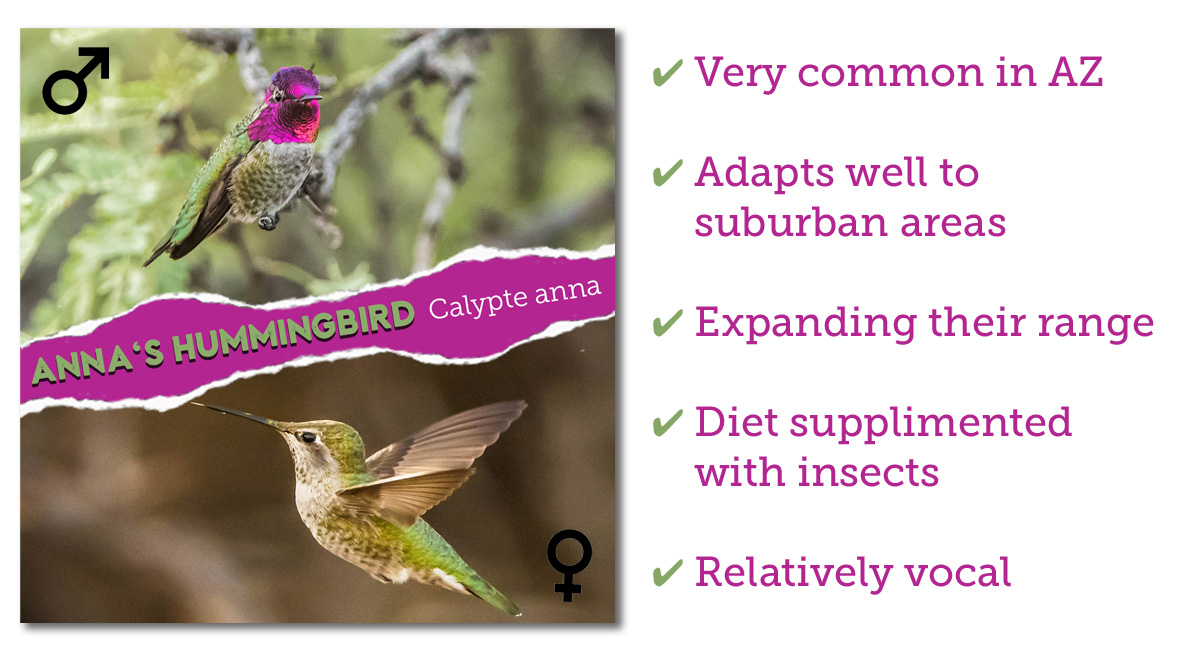 Male Anna's hummingbirds are the only hummingbird species sporting a "red" crown. Even when observing quick moving birds, the iridescent magenta/red/pink crown is easily discernable from quite a distance. A broken white eye-ring is also present in most Anna’s males. Their backs are shiny olive green and green specks overflow into the buff gray/off-white breasts.

Female Anna’s hummingbirds are less striking than the males; however, some Anna’s females have flecks of iridescent coloring on their chins. Female Anna’s also have a broken white eye-ring, and have a white tipped tail. Their shade of olive green is a bit duller than that of male Anna’s. 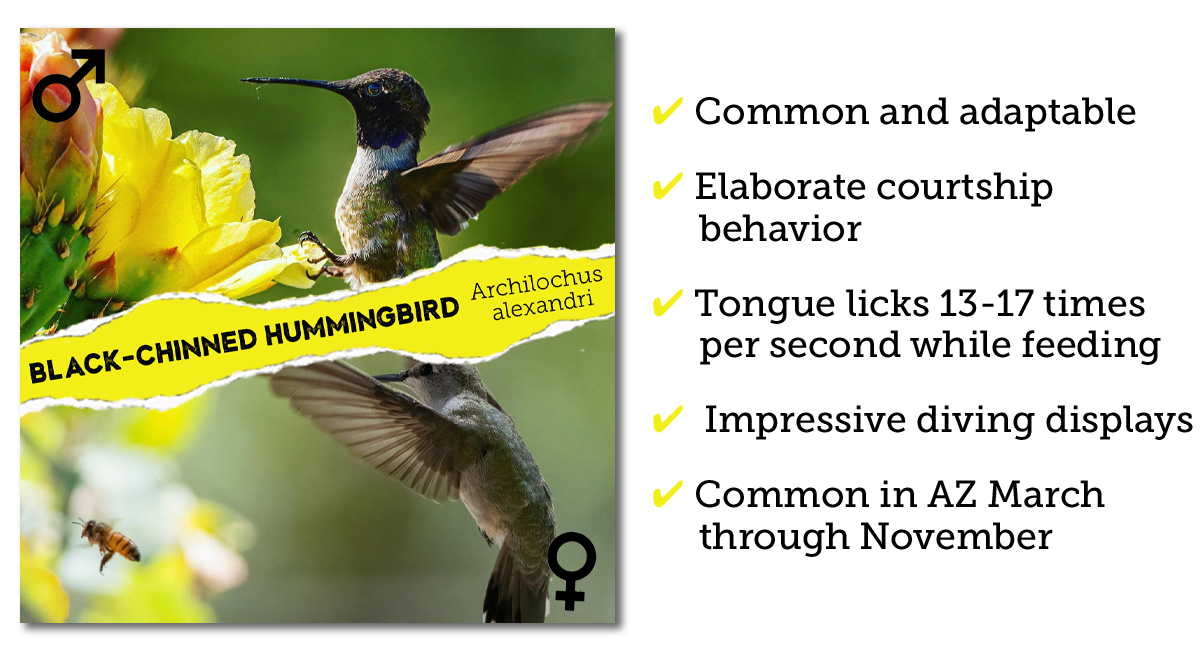 The shimmering purple throat patch of a male black-chinned hummingbird looks almost like a fancy turtleneck snugged tight below its all-black head and chin. If the light isn’t quite right, the iridescent throat parch will appear black. As soon as the bird moves and the light reflects off of it, you’ll be able to identify him. Their backs are the standard metallic green of many Arizona hummingbird species, and like the others, it bleeds forward to where it meets the light white/buff color of the breast.

Female black-chinned hummingbirds have a light buff/beige colored breast. The white tips of their rounded tail feathers will help distinguish them from other hummingbird species, as will the white spot behind their eye, similar to that of the male black-chinned.

Primarily visiting from Mexico to breed from March to October in oak-studded southern Arizona canyons, broad-billed hummingbirds have been expanding their range northward into the high-desert riparian areas of north-central Arizona. They are known to visit feeders at any time of day, but seem to prefer longer feeding sessions in the evening. 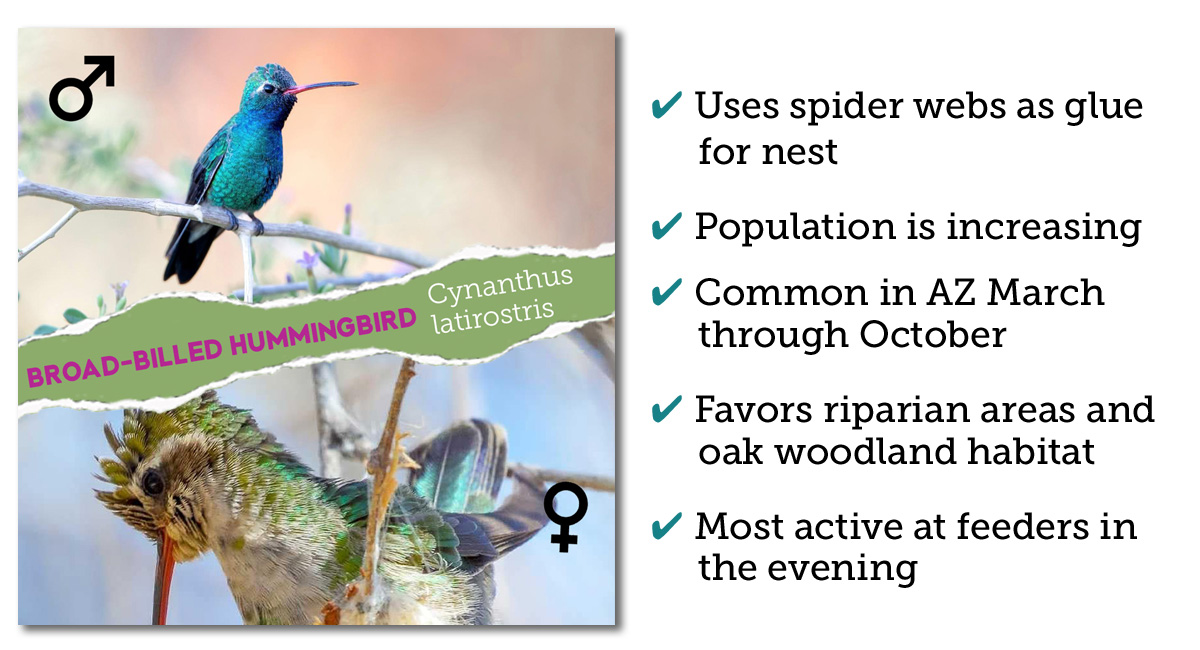 Some of these common seasonal migrants nest in parts of southern Arizona, and others are just passing through on their journeys further north. A majority of the broad-tailed hummingbird population resides in Mexico and Guatemala most of the year, but are common throughout much of Arizona from March through August. 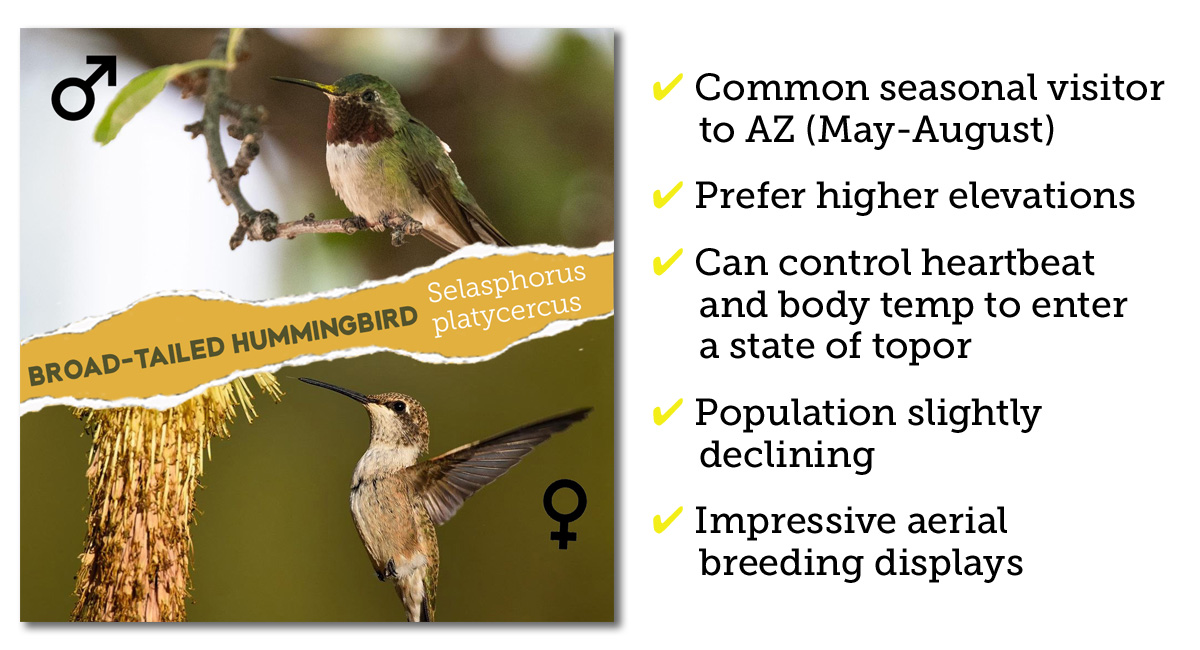 Male broad-tailed hummingbirds have iridescent green feathers along their backs that blend into brownish-hued wings, and eventually fading to white or buff on their breast. The shiny ruby-colored throat patch (gorget), and their broad, rounded tails help to differentiate these medium size hummers from other species.

Female broad-tailed hummingbirds also have iridescent green along their backs that fades to brown, then buff/white on their bellies, just like the males. They have small flecks of iridescent green on their head and neck, and of course that broad, rounded tail.

These competitive and quick hummingbirds are natives to Arizona. Their aerial displays and rambunctious attitude make them a crowd favorite to watch around the feeder and in the parks as they defend their space with a high level of intensity. 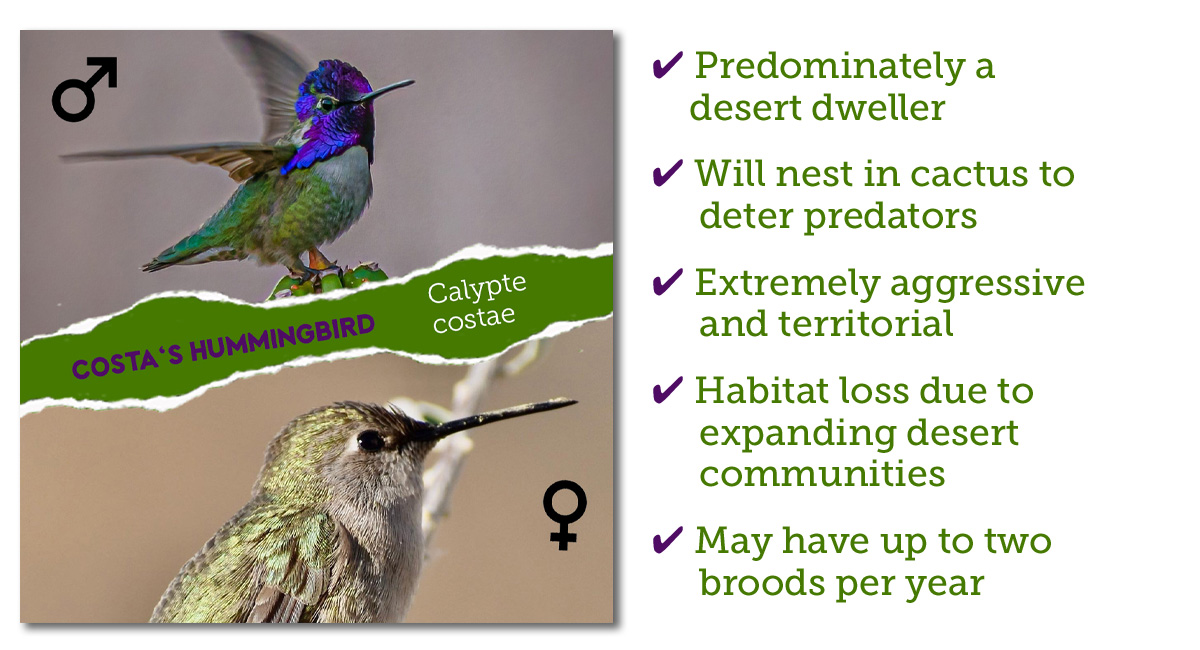 The iridescent purple hood and gorget of the male Costa’s hummingbird almost resembles a handlebar mustache. Both male and female Costa’s have green backs that transition to a whitish/buff on their undersides. Females are more drab in color and have a more whitish belly than males.

In similar fashion to Costa’s, the Rufous hummingbird will aggressively chase other hummingbirds, or even much larger birds if they are the slightest bit threatened. Rufous are seasonal migrants to Arizona and most common here during the fall migration (July-October) as they cross the state. Rufous hummingbirds can also be seen in Arizona during their spring migration (March-April), but in a much smaller scale. 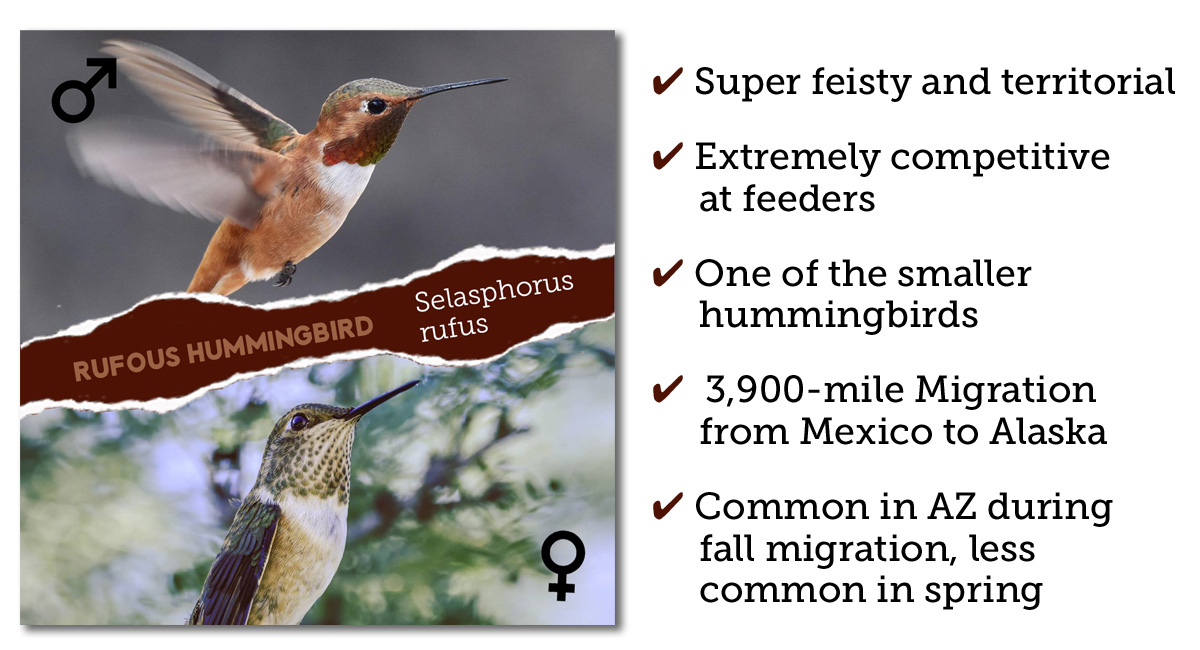 Male Rufous hummingbirds are generally rust colored with a very shiny, almost copper colored gorget. There may be flecks of green mixed sparingly with the back, wing, and belly feathers. Female Rufous also have a general rust appearance on their underbellies, but iridescent green on their backs. The neck of the female Rufous may have flecks of green.