In 1863, the New Mexico territory was divided, creating the Arizona Territory. The new territorial capital was established at Prescott in 1864.

As Anglo settlers entered the rich bottom lands near the Verde River at West Clear Creek, they came into conflict with the Tonto-Apache and Yavapai Indians who were already established in the area. Farms were raided by the Indians for crops and livestock. The settlers fought back bringing about an escalation of hostilities. In May 1865, the settlers demanded military protection. 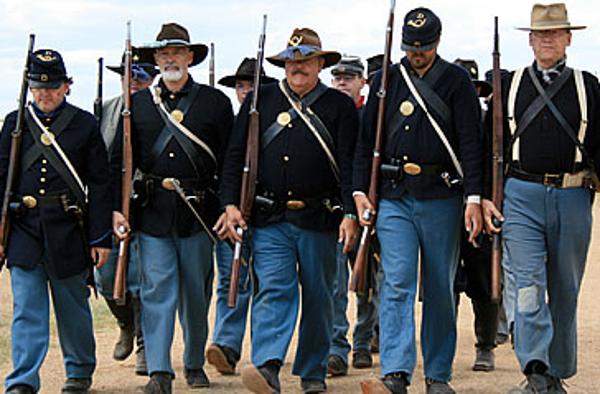 The early volunteer military units were composed of almost entirely Mexican recruits. Often marching barefoot and on half rations, they were known as fierce fighters.

In August 1865, they established a tent camp overlooking the farms at West Clear Creek. Regular U.S. Army troops relieved the Arizona Volunteers in September 1866. Camp Lincoln, the next post, was established December 1865, and was located one mile north of the present site and was used from 1866 to 1871. In 1868 the name was changed to Camp Verde.

Malaria plagued the camp so much that in 1870, the Army made the decision to move again. Construction started at the present post in 1871. All the buildings were completed by 1873. There were 22 buildings arranged around a parade ground. Designed to house two companies of cavalry and two of infantry, it averaged only one company of each.

Camp Verde served as a staging base for military operations in the surrounding countryside. Infantry troops built a wagon road west to Fort Whipple near Prescott and east to Fort Apache. With its construction the movement of troops and supplies improved along the Mogollon Rim. Later it came to be called the Crook Road after General George Crook.

Fort Verde Days, held annually, gives visitors a chance to experience life at the historic fort in the 1890s. 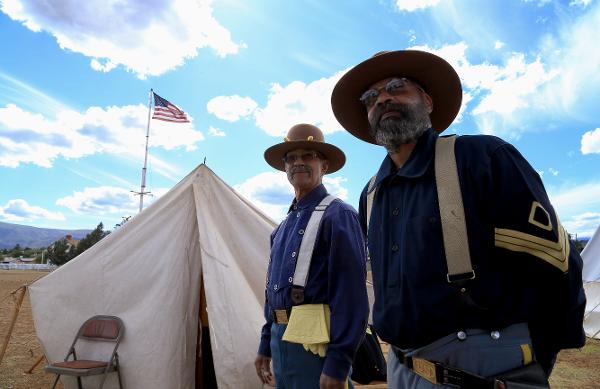 The first Buffalo Soldiers troop serving at Fort Verde was Troop I, 10th Cavalry of the Buffalo Soldiers. It was organized in 1866 and came to Fort Verde in 1885, following a distinguished record of military service during the Indian Wars of the Western frontier.

The Buffalo Soldiers included two regiments of all-Black cavalry, the 9th and 10th cavalries, formed after Congress passed legislation in 1866 that allowed African Americans to enlist in the country’s regular peacetime military.

The legislation also brought about the creation of four Black infantry regiments. Many of the men in these regiments were among the approximately 180,000 African Americans who served in the Union Army during the Civil War.

Buffalo Soldiers were members of the US 10th Cavalry Regiment of the US Army, formed on September 21, 1866 at Fort Leavenworth, Kansas. The nickname “Buffalo Soldier” was given to them by the Native American tribes they fought. The term eventually became synonymous with all of the African-American regiments formed in 1866.

Federal Indian Policy centered on creating reservations as a way of controlling the Indians. The Rio Verde Reservation was established in 1873 with headquarters near present day Cottonwood. Between 1873 and 1875, nearly 1500 Indians from various bands were placed on the 800 square mile reservation. With the Army's help, Indians built an irrigation ditch and had 56 acres under cultivation in 1874.

In 1875, Congress, acting on demands from businessmen in Tucson, ordered the entire population uprooted and moved to the San Carlos Agency near modern day Globe. In cold late February, the 180-mile ten-day trek to the reservation began. It resulted in the death or disappearance of about 100 Indians, from exposure, insufficient food, and a factional fight. The former reservation was opened to miners and settlers in 1877.

After 1875, the Army's main duty was to put and keep Indians on the San Carlos and Fort Apache reservations. The bands were spread out and mobile, and each group had their own chief making it difficult to negotiate peace. The bands were forced together on the reservation, despite tribal rivalries. Renegades frequently left the reservation. They were hunted down by patrols relying on Indian scouts led by Al Sieber.

In August 1881, a nervous Indian Agent ordered the Army to arrest Nakai de Klinni, a prominent Apache medicine man. During a tense confrontation at Cibicue on the White Mountain Reservation someone fired a shot. A firefight erupted leaving six soldiers and the Apache medicine man dead. Through the winter both sides tried to preserve a shaky peace. Finally on July 6, 1882 a band of some 50 warriors jumped the reservation and began raiding throughout the Rim country. The Army, in a textbook example of concentration of force, located the renegades at Big Dry Wash, 37 miles east of Fort Verde. The resulting battle on July 17, 1882 was the last major action of the northern Apache Wars. The Big Dry Wash fight resulted in the death or return to reservations of all the renegades involved.

Camp Verde had been renamed Fort Verde in 1879 to signify permanence, but with the end of raids by 1882, the Post became less important. It was abandoned in 1891 to the Department of the Interior, which sold it at public auction in 1899.

The quality of Army doctors varied, some had almost no formal training, others were medical school graduates. With few effective medicines their job was a difficult one. All together, 27 doctors served at Ft. Verde. Among the more notable were Dr. Edward Palmer, Dr. Elliot Coues, and Dr. Edgar Mearns.

Take a Glimpse of the Past!

Take a virtual tour through the history of Fort Verde! Click on the links below and experience the high points of our historic property. Enjoy these entertaining interpretive videos!

Experience life through the eyes of a frontier soldier at Fort Verde State Historic Park. The fort was a base for General Crook’s U.S. Army scouts and soldiers in the 1870s and 1880s. From 1865 – 1891, Camp Lincoln, Camp Verde and Fort Verde were home to officers, doctors, families, enlisted men, and scouts. The park is the best-preserved example of an Indian Wars period fort in Arizona. Several of the original buildings still stand and living history programs are scheduled periodically, giving visitors a glimpse into Arizona’s history. Today visitors can experience three historic house museums, all furnished in the 1880s period, that are listed on the National and State Register of Historic Places. The former Administration building houses the Visitor Center with interpretive exhibits, period artifacts from military life, and history on the Indian Scouts and Indian Wars era. The park offers picnic tables, restrooms, RV and tour bus parking, and is ADA Accessible.