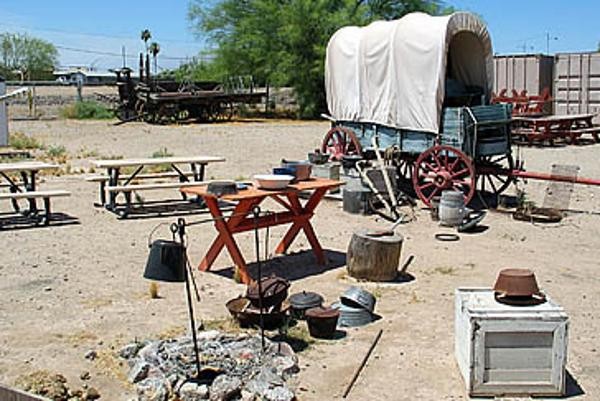 Connect Your Class to the Past! Colorado River State Historic Park offers interpretive education programs about the park's history and science programs related to the Wetlands to supplement your classroom curriculum. Each program meets specific Arizona Standards for that program’s recommended grade levels.

History of the Army’s Yuma Depot (Grades K and up): The Yuma Quartermaster Depot served as an army supply depot between 1865 and 1883. Touring five original buildings of the depot, students learn the purpose of the site and its role in storing supplies for all the forts in Arizona Territory during the Indian Wars. Depot buildings on the tour include the old Storehouse, the Quartermaster’s Office, the Water Reservoir, the Quartermaster’s House, and the Corral House.

Skull Detectives (Grades K-8): Many different species of animals populate the desert around Yuma and live along the banks of the Colorado River. The skull bones of these mammals tell us a lot about the animals themselves—including what type of food they eat, how big of an animal they are, their sense of smell, and whether or not they have good eyesight. Using the skulls of native animals of this area, students will become skull detectives and learn how to “read” information from the skulls.

Emigrants of the Gold Rush (Grades 2-5): After gold was discovered in California in 1848, thousands of emigrants followed the Southern Trail to Yuma on their way to the goldfields. During this program, students will trace the route of the emigrants across the United States, discover the supplies brought for the long and arduous journey, and even pan for gold as the emigrants did!

An Army Soldier’s Life (Grades 4-5): The heydey of the Yuma Quartermaster Depot was during the Indian Wars period of the 1870s. When not on campaign, Army soldiers led a largely monotonous existence at their posts. By looking at the strict, daily routine of western soldiers in the 1870s, students will learn how the average army soldier spent much of their time during the Indian Wars period. Students will have the opportunity to explore the soldiers’ diet, drill in formation, learn bugle calls, and conduct fatigue duties.

Eco-explorations (Grades K-2): The YEW is home to a diverse array of native plants and animals. Hiking through the YEW, students will become eco-explorers, using their various senses to examine the plants and animals of the YEW. Students will be encouraged to explore the natural world by listening for bird calls, searching for animal prints in the mud, smelling a pungent marsh fleabane plant, and touching fluffy cottonwood and willow seeds.
K: Science S1C1PO1-2; S1C4PO1; S4C3PO1
1st: Science S1C1PO1-2; S4C3PO1
2nd: Science S1C1PO1; S1C2PO2-4

Wetlands Adaptations (Grades 3-4): Wetlands are defined as an area that contains water-soaked soil, water tolerant plants, and water at or near the ground’s surface. All that water can create challenging environmental conditions, including periodic flooding, saline soils and water, and a high degree of species competition. Wetland plants and animals must be able to survive in these tough conditions. On a guided hike through the YEW, students will explore plant and animal adaptations that allow species to thrive in these conditions.
3rd: Science S4C3PO3,5; S4C4PO1
4th: Science S4C1PO1; S4C3PO1; S4C4PO2

Water Quality Investigations (Grades 5-6): The health of a body of water can be assessed through water quality testing. During this program, students will investigate a number of water quality parameters, including temperature, pH, and dissolved oxygen levels of Colorado River water. The testing results will then be analyzed to determine factors that may be influencing these results, and the overall significance of the results.
5th: Science S1C1PO1-2; S1C2PO1-5; S1C3PO1-3; S1C4PO1
6th: Science S1C1PO2; S1C2PO1-5; S1C3PO1-2; S1C4PO5; S4C3PO2; S6C1PO5

Wetlands Restoration (Grades 7-8): Over time, the natural wetlands that historically bordered the Colorado River have disappeared. Removal of the native cottonwood and willow forests, the construction of dams, and the introduction of invasive species all contributed to the disappearance of the wetlands. Through the YEW restoration project, however, the historic wetlands environment has been recreated. During this program, students will learn the story of the Colorado’s historic wetlands and the restoration of the YEW. They will then analyze the benefits of the restoration project through investigations of native plant and/or bird diversity in the YEW.
7th: Science S1C2PO5; S1C3PO1-2,4-5; S1C4PO3,5; S3C1PO1-2
8th: Science S1C2PO5; S1C3PO1-2,5-6; S1C4PO1,5 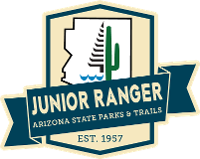 If you're between ages 6–12, you can become a Junior Ranger at Colorado River State Historic Park! Pledge to do your part to help preserve the beauty of the park for everyone to enjoy!

When you visit the park ask for a full Junior Ranger booklet at the Visitor Center, Ranger Station or office. Complete the activities during your visit and then bring it to a Park Ranger for review. When a Park Ranger approves your work you'll be asked to take the Junior Ranger Pledge and get sworn in as our newest Junior Ranger. You'll also be given a Junior Ranger Button. We hope to see you at the park!

Knowing the Code: Before our modern day internet or even phones, people communicated using the telegraph. The telegraph allowed people to communicate over long distances using beeping sounds that traveled through telegraph wires, just as sound travels through our telephone wires today. Joesph Henry invented the telegraph and Samuel Morse created the language of short and long beeps to represent letters and numbers.

The first military telegraph in Arizona was located here on the grounds of the old Yuma Quartermaster’s Depot. Use the Morse Code below to discover what was on the Quartermaster’s supply order list. 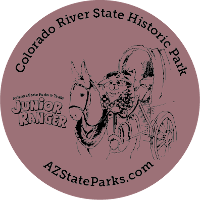 Junior Ranger Pledge: “As an Arizona State Parks Junior Ranger, I pledge to help the park rangers protect and preserve habitat, wildlife, and help keep the park clean and safe for visitors and wildlife.”

Remember, you can become a Junior Ranger at nearly all Arizona State Parks. So explore our website and visit the FOR KIDS page for each park for more activities.