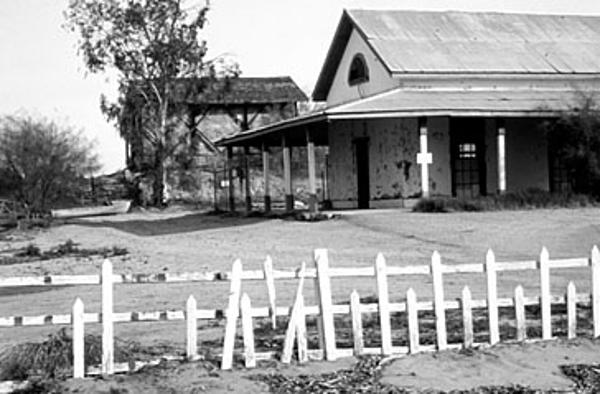 Sitting on a bluff overlooking the Colorado River, three miles west of the confluence of the Colorado and the historic Gila River, are the remains of Arizona’s famous Territorial Prison, and a short distance west are the surviving buildings that served as a part of the Yuma Quartermaster’s Depot. Hernando de Alarcon, who accompanied Coronado on his search for the Seven Cities of Cibola, passed this site in 1540. Padre Kino saw the present location of the Prison and the Quartermaster’s Depot in 1683, and Padre Graces established a mission directly across the river and was later killed there by the Indians in 1781.

Yuma began to experience the American westward surge when countless immigrants crossed by ferry from Yuma on their way to the California gold fields in 1849. In 1850, a military post was established at Yuma, and when rich placer gold strikes on the Colorado River precipitated a gold rush in 1858, Yuma experienced a boom. In 1871 Yuma incorporated and became the county seat of Yuma County. 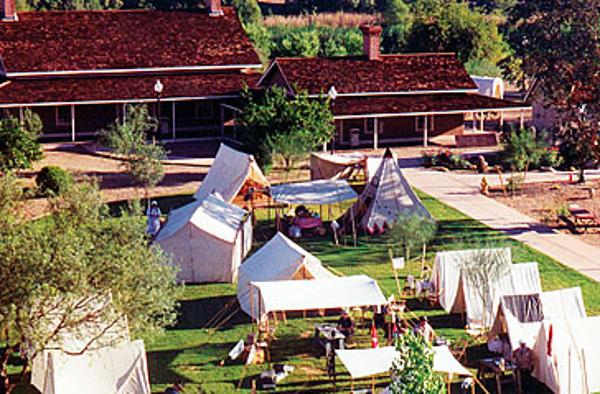 The Colorado River State Historic Park is located on a portion of the grounds of the old U.S. Army Quartermaster Depot (QMD) established in 1864. This site is significant in the history of the Arizona Territory. The City of Yuma, through an Intergovernmental Agreement, supports operational costs at this Park. The purpose of the Park is to protect its historic structures and interpret the diverse history of the site.

Major William B. Hooper established the QMD on a high bluff overlooking the Colorado River. Supplies were brought from California by ocean-going vessels traveling around the tip of the Baja Peninsula and then north as far as the mouth of the Colorado River. At this point supplies were transferred to river steamboats and brought up river to the QMD. The QMD served as a storage yard and a military supply center for fourteen military posts in Arizona, New Mexico, Nevada, Southern Utah, and West Texas. The QMD maintained a six months’ supply of ammunition, clothing, and food at all times.

The QMD had been identified in the early 1960s as a potential historic park site. The Parks Board first acquired the structure referred to as the Office of the Depot Quartermaster from the federal government on June 3, 1969. The adjacent water reservoir and property were acquired from the federal government on December 23, 1980. At the July 10, 1981, meeting of the State Parks Board, the Board adopted a resolution to support Senator Dennis DeConcini’s and Representative Bob Stump’s efforts to secure legislation that would provide the Secretary of the Interior the authority to relocate the Yuma County Water Users Association and to transfer the remainder of the historic Quartermaster Depot Complex to the State. Senator DeConcini (S 698) and Representative Stump (HR 3168) had introduced legislation to accomplish this purpose. The legislation was supported by resolutions from the Yuma Crossing Park Council, Yuma City Council, County Board of Supervisors and the Yuma County Water Users Association. 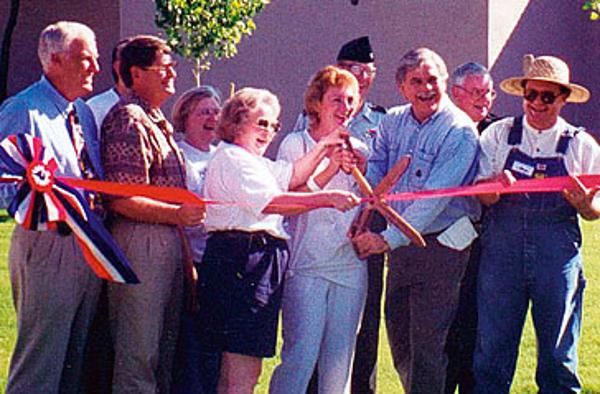 Ribbon-cutting at the re-opening in 1997

Arizona State Parks hosted a groundbreaking ceremony for the Office of the Depot Quartermaster on October 29, 1986. Don Charpio, Executive Director of State Parks, introduced members of the Yuma Crossing Park partnership, Denny Mundell, Chairman of the Yuma Crossing Park Council, Donald Soldwedel, Chairman of the Yuma Crossing Foundation, and Mayor Jim Buster, City of Yuma. The Honorable Senator Dennis DeConcini gave the keynote address. On this occasion, Mayor Jim Buster provided Reese Wooding, Chairman of the State Parks Board, a document to transfer ownership of the property and the structures known as the Commanding Officers Quarters (COQ) and the Commanding Officers Kitchen (COK) from the City of Yuma to the Parks Board. This transfer was officially completed on January 13, 1987. This property and structures had been acquired by the City of Yuma from the General Services Administration (GSA) in 1957 because of their historical value.

The Corral House, warehouses, and other structures and land were leased by State Parks from 1988 until they were acquired on March 19, 1999. After all the properties were under the management of the Parks Board, the site was operated as a unit of the Yuma Territorial Prison State Historic Park until 1990. That year the nonprofit, Yuma Crossing Foundation, Inc., entered into a concession agreement with the State Parks Board to develop, operate and manage the site as a living history museum. This concession agreement was terminated on June 30, 1996. At that time, the City of Yuma offered to assist Arizona State Parks with $1,000,000 for major redevelopment and enhancement of the site and a contribution of $150,000 annually to the park's operating budget.

To oversee the renovation and enhancement of the Park to have it ready for the public opening, Kevin Eatherly was hired as Unit Manager. On September 27, 1997, a dedication ceremony initiated a two-day celebration of the grand reopening of the Yuma Crossing State Historic Park. Ken Travous, Executive Director of State Parks, introduced special guests and provided them an opportunity to speak. They were: Joe Holmwood, Parks Board Chair, State Senator Pat Conner, State Representative Bob McLendon, City of Yuma Mayor, Marilyn Young and City Administrator, Joyce Wilson.

After operating the Park as Yuma Crossing State Historic Park for almost 10 years, the Park staff under the leadership of Park Manager Gerry Emert requested that the Park's name be changed. The staff felt that Yuma Quartermaster Depot State Historic Park better reflected the original nature of the site and its interpretive focus. The proposed name change was brought to the State Parks Board for consideration at the March 15, 2007, meeting. Following the staff presentation, the Parks Board unanimously approved the recommendation to change the Park's name.

In the fall of 2009, during the Great Recession, Arizona State Parks entered into an intergovernmental agreement with the City of Yuma to operate the park.  Through this agreement, and a subsequent agreement between the City of Yuma and the Yuma Crossing National Heritage Area (YCNHA), the YCNHA took over daily operation of the park.  In 2013, the YCNHA oversaw the development of a new park master plan that expanded the interpretive focus of the park’s exhibits from the history of the Yuma Quartermaster Depot to the broader past, present, and future of the Colorado River.  With the changing interpretive focus, the park was renamed the Colorado River State Historic Park in October of 2017.