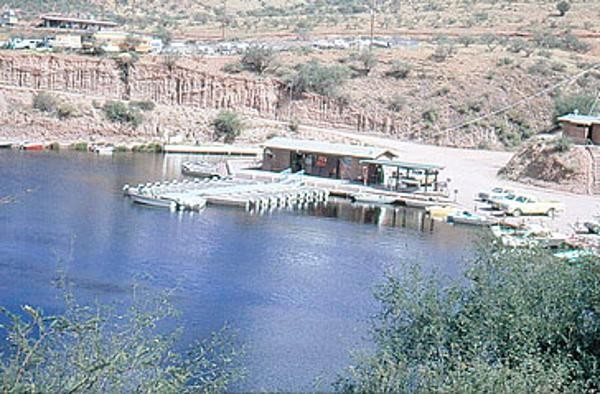 Patagonia Lake and the associated recreation facilities were constructed in the late 1960’s by a group of citizens incorporated as the Lake Patagonia Recreation Association, Inc. (LPRA). The LPRA had completed acquisition of the land on October 3, 1967.

A mild climate, the scenic and historic qualities of the Sonoita Creek watershed, and diverse water-related recreational opportunities led to popularity of the lake and facilities that the Association was not prepared for. Recreational uses were immediately successful with camping, boating, water skiing, fishing, picnicking, and swimming as the predominant activities. The LPRA soon recognized that insufficient capital was available to meet the demand, provide for the health and safety requirements of the increasing user base, and make the payments to the Farm Home Administration.

As early as 1972, Ted Blue contacted State Parks offering to sell the acreage he owned surrounding the Patagonia Lake development and to assist the Agency in the acquisition of the lake and recreational improvements held by the Lake Patagonia Recreation Association. About this same time, Senator Scott Alexander, from Tucson, advised State Parks about his concerns regarding the condition and operation of the recreation area at Patagonia Lake. Ted Blue appeared before the Parks Board at its March 7, 1973, meeting to encourage the Parks Board to consider acquiring Patagonia Lake as a State Park. 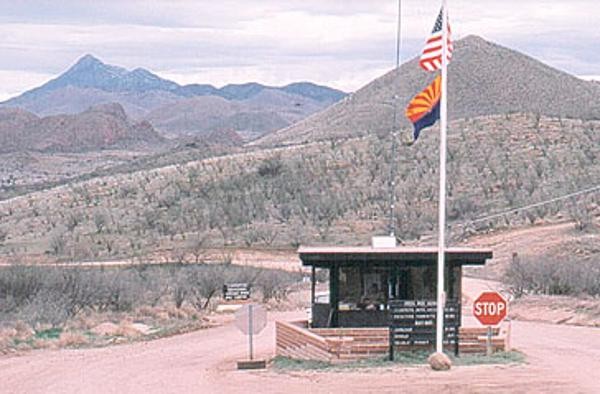 The Parks Board requested that the planning staff determine the eligibility of the site and prepare a plan for the land that would be desirable if the site were to become a State Park. State Parks worked closely with the Game and Fish Department in developing various alternatives for the operation and management of Patagonia Lake as a State facility. By October 1973, the Chairman of the Parks Board, B. Marc Neal, had received a Resolution adopted by the Board of Supervisors of Santa Cruz County. The Resolution recognized the interest of State Parks and Game and Fish in acquiring Patagonia Lake and the surrounding lands for a State Park. It also stated that the Board of Supervisors felt it was in the best interest of the State and Santa Cruz County to have Patagonia Lake as a State Park and urged the Legislature to pass the necessary legislation.

In a joint meeting of the State Parks Board and the Game and Fish Commission held on December 19, 1973, the Board and Commission, after considerable discussion, agreed the best course of action was to acquire the 615 acres comprising the Lake, its water rights, recreational facilities and additional buffer lands surrounding the Lake. Legislation authorizing the acquisition of Patagonia Lake as a State Park was introduced early in the 1974 session. The legislation, House Bill 2295, was supported by the Parks Board, the Game and Fish Commission, the Santa Cruz County Board of Supervisors, the Lake Patagonia Recreation Association, and an influential group of citizens from the local area. 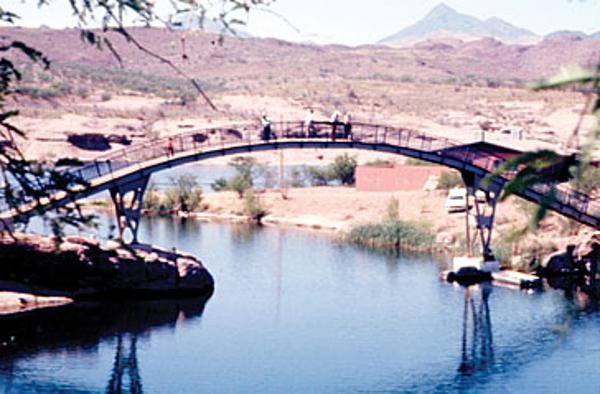 House Bill 2295 passed the Legislature and was signed into law on May 13, 1974, by Governor “Jack” Williams as Chapter 156. The bill established the state park, authorized its acquisition and appropriated the required amount of money from all State Park fees and revenues collected annually to assume the existing loan that the Lake Patagonia Recreation Association had from the Farm Home Administration. The Lake Patagonia Recreation Association had secured the loan to provide funds to construct the lake and develop the recreation facilities. The Legislature also authorized the State Land Department to exchange State Trust Land for the 3000 acres of private land surrounding Patagonia Lake. The legislation also authorized the State Parks Board to acquire by either lease or purchase any of the lands acquired by the State Land Department for state park purposes. After working through lengthy, complex negotiations, Patagonia Lake was acquired by State Parks on February 3, 1975, and officially opened as Patagonia Lake State Park on April 1, 1975, with Duane Hinshaw as Park Manager. State Parks leased 2043 acres of state land in 1991 making the Park’s total acreage 2,658.

The Arizona State Parks Board, by motion on January 30, 1974, stated that the Board would actively support the passage of a bill to acquire Patagonia Lake and its management as a state park in cooperation with the Game and Fish Department. The Board would also support the acquisition of the private buffer lands through an exchange program for State Trust land.

Upon the passage of the Patagonia Lake legislation, the Parks Board began to closely monitor the status of the proposed land exchange. The Parks Board learned on September 30, 1975, that Application No. 61-34255 to exchange the 3,066 acres surrounding Patagonia Lake State Park had been filed by Continental Oil Company (CONOCO). CONOCO had obtained an option to purchase the acreage from Western Farms Investment Company. After acquiring the property, CONOCO stated it would apply its best efforts to effect the exchange to help create the State Park as contemplated by HB 2295. The purchase agreement stated that CONOCO would be under no obligation to pursue the land exchange after July 31, 1976. 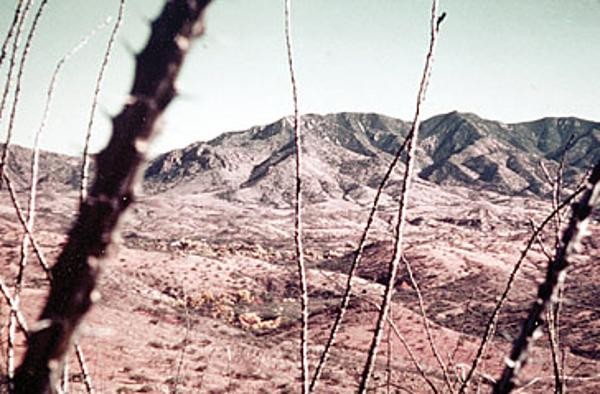 The foothills viewed through Ocotillo in 1974

Following the completion of the appraisals on the offered and selected lands, it was learned the land CONOCO had selected exceeded the land value of the land offered. CONOCO offered to pay cash for the difference in value. However, for the State Land Department to be able to accept the money, legislation was required to provide the Department with the authority. Thus, Senate Bill 1342 was introduced in the 1976 legislative session and passed and signed into law as Chapter 177 by Governor Raul Castro. This legislation authorized the State Land Department to accept cash payments for the difference in selected land values of a land exchange.

The Parks Board was advised by the State Land Department that the updated land appraisal was to be completed on May 21, 1976. At its July 20, 1976, meeting, the Parks Board requested that staff do an investigation to determine what the Board’s obligations were related to the exchanged State land. The Parks Board also determined at this meeting that it would not request funds for acquisition of the exchanged land in the 1977-78 Budget Request.

The staff worked closely with the Attorney General’s office and learned that the Parks Board was under no obligation to either lease or purchase the land once it became the property of the State Land Department. The Parks Board decided it could wait until the exchange was finalized to request an appropriation from the legislature to either lease or purchase the land it desired.

The Parks Board, at its November 17, 1989, meeting, authorized Executive Director Travous to pursue a Commercial Lease from the State Land Department for a portion of the exchanged lands around Patagonia Lake State Park. That lease was granted to State Parks in August of 1991.

In June 1994, the Parks Board applied to purchase the State Trust land surrounding Patagonia Lake State Park (Application No. 53-100018). In May 1995, Headquarters West completed the appraisal of the state land. As the two agencies moved toward a public auction, the Parks Board was advised verbally by the attorney for the adjacent land owner (Circle Z Ranch, Inc.) that the Ranch had a prescriptive right of access for hiking and riding trails across the state land. On a number of occasions, State Parks’ staff met with the attorney and owners in an attempt to negotiate a possible joint use of trails if State Parks were to acquire the state land. No satisfactory solution has been negotiated nor has the State Land Department reached a solution to the alleged prescriptive easement. In the fall of 2003, the two agencies met on site to see if there is any course of action that might help resolve the stalemate. The pursuit of this acquisition is on hold until the issue of the prescriptive easement has been resolved between the State Land Department and the title insurance company.

Tucked away in the rolling hills of southeastern Arizona is a hidden treasure.Patagonia Lake State Park was established in 1975 as a state park and is an ideal place to find whitetail deer roaming the hills and great blue herons walking the shoreline. The park offers a campground, beach, picnic area with ramadas, tables and grills, a creek trail, boat ramps, and a marina.

The nearby Lakeside Market offers boat rentals and supplies. The campground overlooks the lake where anglers catch crappie, bass, bluegill, catfish, and trout. The park is popular for water skiing, fishing, camping, picnicking, and hiking. And the tracks of the New Mexico/Arizona railroad lie beneath the lake and remnants of the old historic line may be found at the Nature Conservancy in Patagonia. Hikers can stroll along the creek trail and see birds such as the canyon towhee, Inca dove, vermilion flycatcher, black vulture, and several species of hummingbirds.