Gathering of the Gunfighters 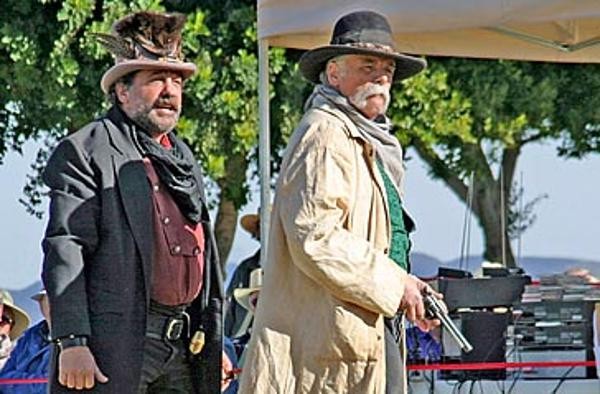 Gathering of the Gunfighters

Lively entertainment awaits you at the Gathering of the Gunfighters.

Each January, Old West reenactment groups ride into Yuma, Arizona for the Annual Gathering of the Gunfighters.

Once their dust settles, the Southwest Ghostriders, Arizona Ghostriders, Pistols & Petticoats and the WesTroupe acting groups begin their skits, set in the time period between 1876 to 1909, for coveted prizes. The event draws thousands from around the Southwest to experience the old west lore in this historic territorial prison setting.

The quiet streets of Yuma will once again be filled with the anguished wails of innocent citizenry crying out: "They robbed the bank!" A host of individual and group competitors from nasty outlaws, rough and ready cowboys, audacious saloon gals, to some just plain ol' low-down dirty, rotten characters will assemble for a day of fun, competition and mayhem.

Serious Wild West enthusiasts and families looking for fun will enjoy the authenticity of the performers' clothing and firearms as well as the colorful and amusing skits. The competitors will perform skits judged on costume, plot continuity, dialogue, character portrayal, verbal expression, body language, use of weapons, stunts, timing, and entertainment value. Judges deduct points for vulgarity, forgotten lines, just plain carelessness, and wearing that 'dern' modern apparel. Vittles, libations, and western wear are available for edification and perusal!

Colorado River State Historic Park and Yuma Territorial Prison State Historic Park hold activities that coincide with the town's Yuma Crossing Day in the old town area. Yuma Crossing Day highlights the historical era of Yuma's past from the arrival of the first Spaniards in the 1500s to the mid-1900s through living history re-enactments. Attractions include historic re-enactments, Cocopah exhibits, a fry bread sale, an arts and crafts sale, and the showing of "Old Plank Road" (courtesy of the Yuma County Library District) in the Prison's audiovisual Room.