PHOENIX – Letters, photographs and other documents related to famous lawman Wyatt Earp that have never been shown in public have been donated to Arizona State Parks and Trails and will be displayed at the Tombstone Courthouse Historic State Park. 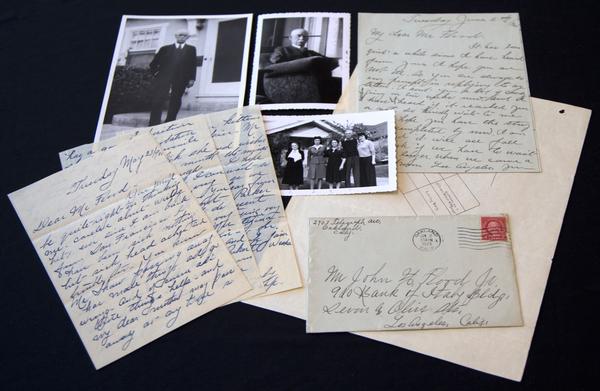 The collection includes handwritten letters from Wyatt Earp’s wife, Josephine, to Earp and others; handwritten notes by biographer John Flood from interviews with Earp; 50 pages of carbon copies of an early typed manuscript of Earp’s biography, with edits; photos and negatives of Earp and Josephine as seniors and of Josephine’s return visit to Tombstone in the 1930s; and documents from Josephine’s last will and from Earp’s “Happy Day” mine. The entire collection was generously donated by Eric and Nicole Weider.

The collection will be processed into the archives and then made accessible to the public after the first of the year. Some will be exhibited on a rotating basis, but the majority will be available year-round to researchers and Wild West enthusiasts.

“These unseen documents and photos of Wyatt Earp will open the door to the past and make Tombstone Courthouse State Historic Park an international destination,” said Arizona State Parks and Trails Executive Director Sue Black. “We are honored that we are the recipients of this valuable donation and we know it will be an exciting exhibit for all of our visitors.”

Tombstone served as the Cochise County seat in 1881, and the two-story courthouse, designed in Victorian style, was constructed in 1882. It served as a county facility until 1931 and was opened and dedicated as an Arizona State Park in 1959. The Courthouse museum offers interpretive exhibits on the history of Tombstone and Cochise County, including a sheriff’s office, artist drawings and interpretations of the Gunfight at the OK Corral, Wyatt Earp, a mining exhibit area, saloon and gaming room, lawyers office and courtroom and reproduction gallows outside.

Wyatt Earp moved to Tombstone in 1879 during the Silver Boom with his brothers. He and his brothers clashed with a group of outlaws called the Cowboys. The tensions culminated in the gunfight at the OK Corral on October 26, 1881.